Warning: This post contains mild spoilers regarding the most recently released Gundam film. If you’re worried about that kind of stuff, just skip on to the build.

During Home Alone 2022, I went to the hobby store to look for supplies, and maybe a new model kit. I checked their website, and the only thing they had that looked intriguing was the High Grade Guntank.

Alas, they were sold out of Guntanks when I got there, but I did find something else. Something I haven’t actually seen in stock anywhere since it came out two years ago. And since I’ve heard so many good things about it, I decided to get it while the getting was good.

So here it is folks - the High Grade Messer, from the recent(ish)ly released film Mobile Suit Gundam Hathaway Part 1, as well as the original 1989 novelization Hathaway’s Flash. 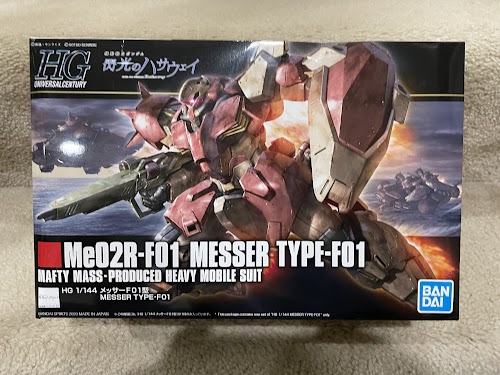 About the Mobile Suit

The Messer is the main grunt suit of Mafty, the terrorist organization led by one Hathaway Noa during the events of Hathaway’s Flash in UC0105. It was built for them by Anaheim Electronics; in fact, the suit is actually part of the same developmental line as the Geara Doga and the Sazabi. Like other grunt suits, it also comes in a Commander-Type variation, and its has only the bog standard armaments of a rifle, shield, and beam saber.

The mobile suit shows up only twice during the film. The first time is when a squad of Messers assault the city of Davao in the middle of the night. 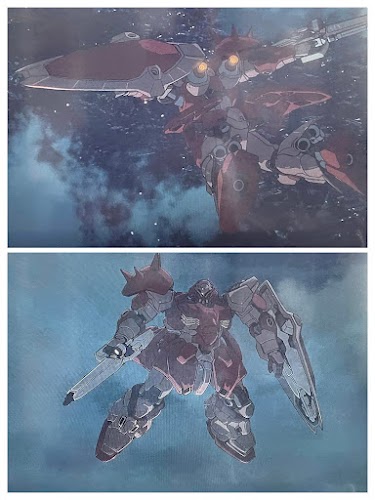 The second time is during a … special-operation-which-I-won’t-spoil, during which we get to see the Commander Type: 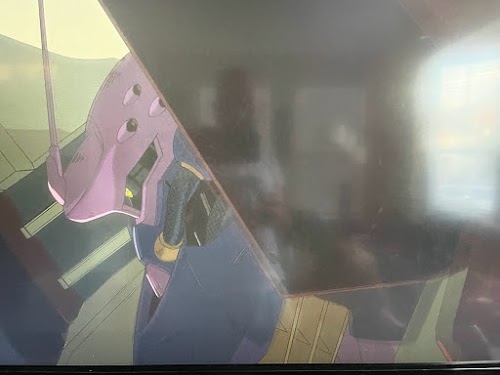 The instruction manual describes the Messer as specializing in urban warfare, though it doesn’t specify exactly how. The only unique trait that it demonstrates is the ability to open up its rear skirt armor to help it slow down and control its descent while in middair (you can see this in one of the photos above).

We may not see the Messer all that much in the film, but that's partly becaus it only covers the first part of the original Hathaway’s Flash novelizations. I have to assume we'll continue to see it more as the story progresses.

About the Visual Design 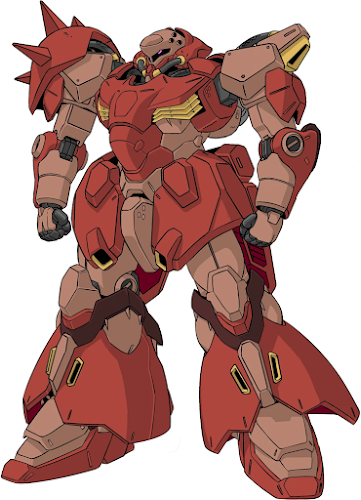 The Messer is a fun one to analyze. It’s basically a fusion of Zeon and Earth Federation aesthetics.

On one hand, the overall silhouette is highly reminiscent of the Geara Doga: 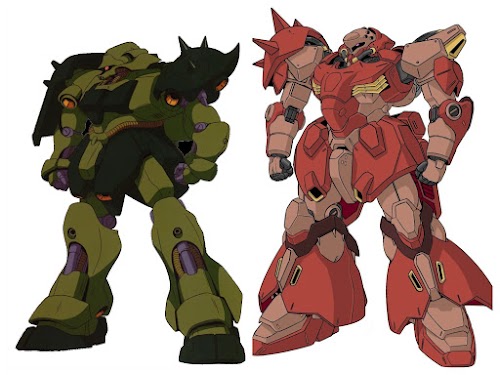 On the other hand, the yellow chest vents, yellow leg vents, and squared off feet are all straight out of a Gundam.

You're not Fooling Anyone

The instruction manual for this kit states that Anaheim intentionally designed the Messer to look very Zeonic in appearance, so that it might look like it was an old, leftover offshoot of the Geara Doga, rather than a new design that they were building for a terrorist organization.

But that doesn’t explain all the Feddy touches. I think a better explanation would have been that they intentionally mixed the two aesthetics so that it was impossible to tell who it was built for. But hey, they don't pay me to write copy for Bandai, so what do I know?

The idea of combining these two aesthetics is not an original one: it goes at least as far back as the Hizack. But there’s something disturbing about the look of the Messer. It’s like an unholy, demonic fusion between the Federation and Zeon, as if the engineers being it were trying to make some sort of statement about the two …

But while bothsiderism is poisonous in the real world, it works well enough as a statement in Hathaway’s Flash. As the leader of Mafty, Hathaway is portrayed as a young man caught between the ideals of Amuro Ray and Char Aznable. More specifically, he seems to be drawn towards Char’s ideals, with Amuro as the angel on his shoulder that keeps him from going full Char. He may keep both men in his mind, but one clearly has more sway.

So it makes all too much sense from a thematic perspectie for the grunt unit of Hathaway’s army to lean toward Zeon aesthetics, with a bit of an Earth Federation touch. I can’t think of many mobile suit designs that do such a good job of crystallizing the themes of the story they appear in.

We haven’t yet touched upon the figurative elephant in the room (pun intended) - the Messer is freakin’ huge!!!!! At 23 meters tall, it is slightly taller than the Nu Gundam1, and almost as tall as the Sazabi. And it’s a grunt suit.

That might sound crazy, but the UC 0090’s and 0100’s were a time when mobile suits were getting increasingly large:

Compared to its contemporaries, the Messer is actually rather average.

This is now officially the largest High Grade box I have. Just look at it: 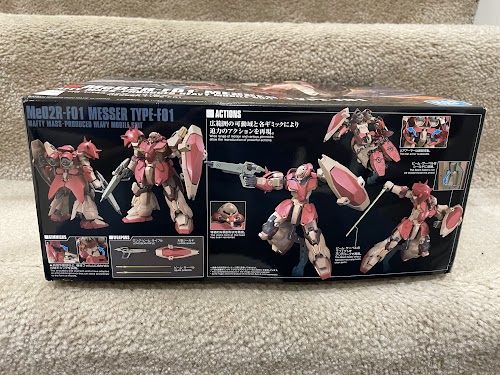 And there’s not much empty space in there either! Even after you take the runners out of their plastic bags, they still come close to reaching the top of the box.

I’m not entirely sure how much detailing I’m going to have to do, but I’m pretty certain I will at least be doing some shading. The colors are all a bit samey, and the shading should give it some extra character.