It’s been a while since I was home alone for a stretch (November 2019 by my count). That’s when I built two Gunpla over the course of a long weekend (or was it actually a single day? I honestly can’t remember …)

(I think) I’ve said this before, but I like building models when I’m alone. It keeps my mind busy, and distracts me from thinking about how much I miss my family.

Anyway, at the end of April, my wife and kids went away again, this time for a whole week. If I could build two kits over a long weekend, I was extremely curious to see just how many I could build over a full seven days. I wanted to do this partly for the fun of it, partly for the challenge, and partly to whittle down the backlog some more (especially since I recently added a few more kits to the pile).

My goal was to complete five kits, but my prediction was that I might get three done at best. After all, it’s not like I had those seven days off. I still had to go to work, do chores, and fulfill some other obligations. It wasn’t nearly as much time as it sounds.

As I write this, Home Alone 2022 has come and gone, and I can now tell you that the final total was three and a half finished models: 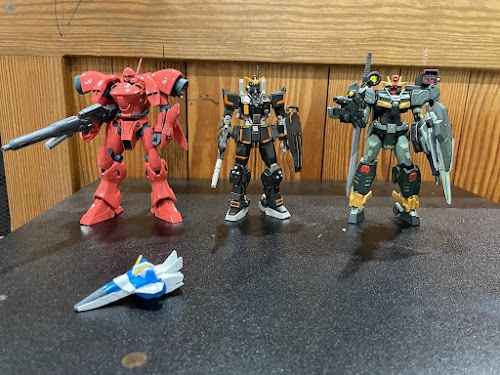 Arguably this is not quite as impressive as finishing two over a long weekend, but keep in mind that:

Now that they’re all finished, I have a lot of build posts to write. Expect to see them roll out across the month of May.