It’s time to get started on this beast of a mobile suit. 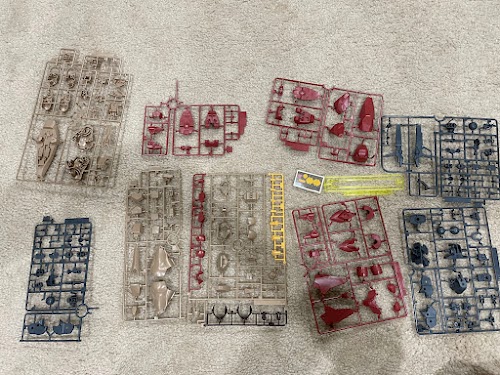 That’s quite a spread for a High Grade. Not only are there a lot of runners, but some of them are also massive. I can’t quite tell if it has that many more parts than a typical HG kit, but it certainly doesn’t have less.

I lost one of the beam saber handles, and it hasn’t shown up over the last few days.

In my defense, just look at this stupid thing: 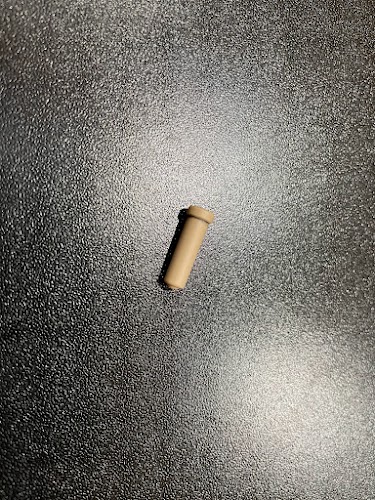 It looks like a piece of packaging, or a loose part that fell off of Ikea furniture. It is entirely possible that I accidentally threw it away thinking it was trash.

Thankfully beam sabers come in pairs, and as you can see I still have one of them. That’s good enough.

(but seriously, what an ugly handle. If it was slightly less plastic-looking I’d wonder if it was a suppository)

At least it uses one of my favorite the beam blade colors: 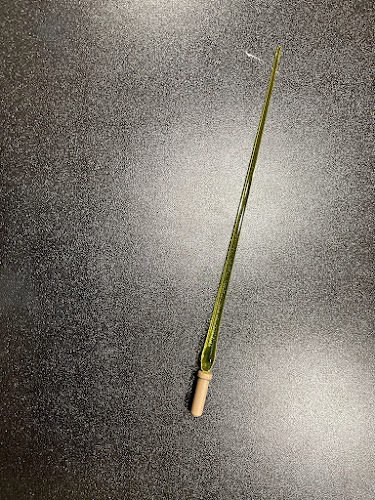 The shield is made of only three pieces, which is absurdly simple even compared to other High Grades: 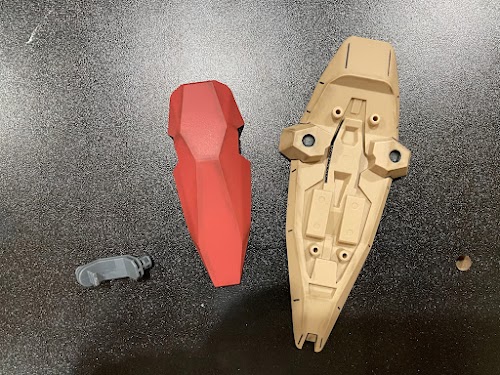 Simplicity itself isn’t necessarily a problem. What is a problem is how cheap the whole thing looks and feels. Look at the back side: 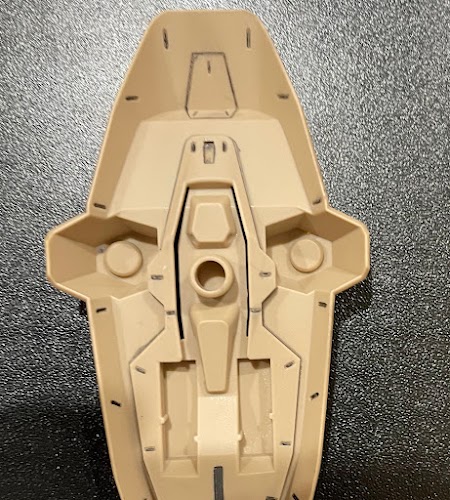 It’s the mirror image of the front, and I don’t think any of this is meant to be realistic detailing. No, they just didn’t bother to cover up all the dips and undulations in the plastic. It’s too thin for that.

This is something you don’t typically see in Gunpla. For example, your typical shield might use thicker plastic, or multiple pieces. Anything to make it look flush and to hide the molding.

So what happened here? My guess is that it’s a cost thing. The Messer is a $35 kit, which is on the high end of cost for a High Grade (with the exception of monsters like the Xi or Penelope, which are the cost of a Master Grade). If you were to fill in a (very large) piece like this shield with extra plastic in order to make it look flush, it would probably require a lot of plastic. And if you were to do this across multiple parts on this model, the extra cost in materials would add up.

So that’s a plausible explanation, but it’s not exactly a good defense. If a decision like this makes the model look too cheap and toylike - if the quality suffers - then the rationale falls apart. For now, I’m going to reserve judgment until I can determine whether or not this is a trend across the entire model.

And in the meantime, the best I can do is add some paint to try and make it look a bit spiffier: 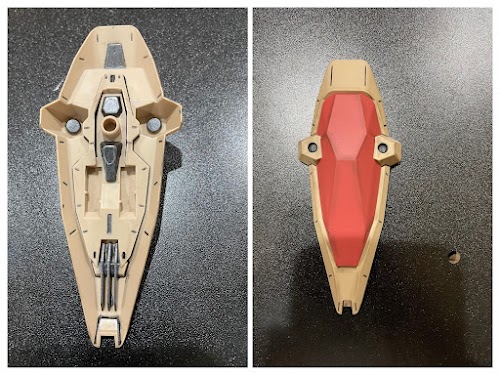 From the front, I think it looks pretty good. The shading brings out all the edges, which makes it appear a bit like a turtle shell.

From the back, I think it looks only slightly better. I probably should have painted more of the interior, but at least the metallic bits give it a bit of a sense of part separation.

In case it’s not obvious yet, the shield is massive. Just stupidly large. Large enough that some size comparisons are in order.

First, we’ll go right ahead and compare the shield to the entire body of the High Grade Victory Gundam: 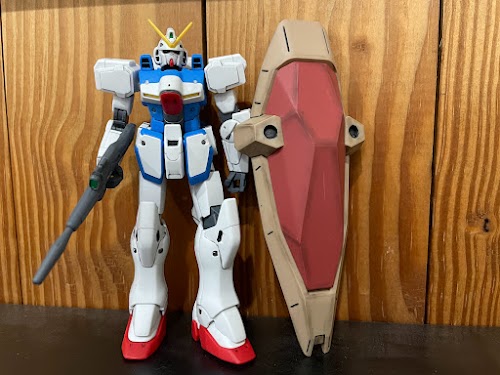 Grantd, the Victory is a miniature mobile suit, but still - how is it shorter than a shield? Imagine,in real life, standing next to a mobile suit that’s so tall that this is what it carries around to protect itself.

Now here it is next to the Grandaddy Gundam: 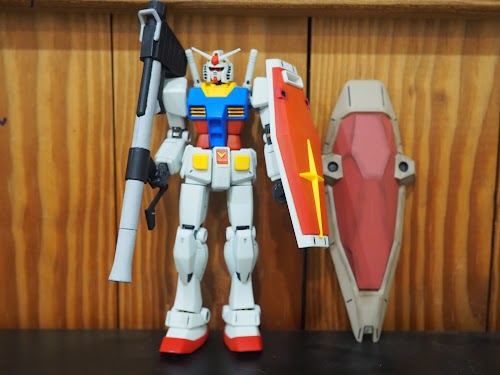 Gramps wins, but it is awfully close.

Lastly, here it is next to just Gramps’ shield:

As well as next to the Nu Gundam’s shield:

I don’t like the design of the beam rifle, and it’s going to be a pain to paint. I’m punting on it for as long as I can.

We get three holding hands - two closed fists, and one trigger finger hand.

These too are absolutely massive: 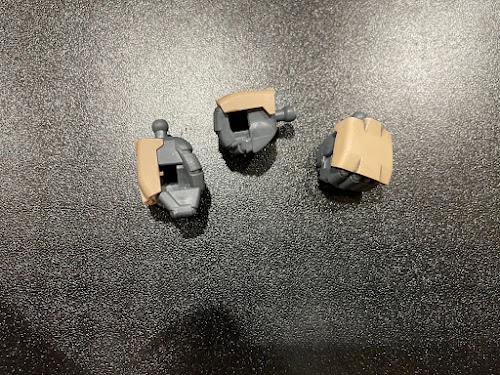 In fact, they’re bigger than the hands on the Master Grade Epyon: 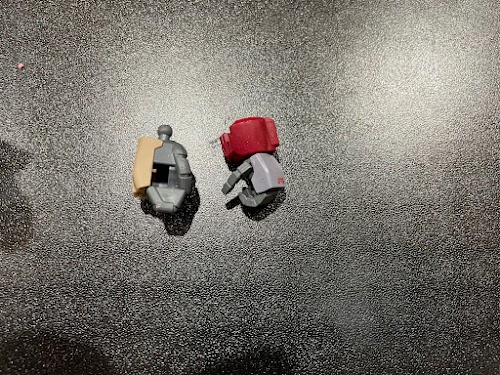 And compared to the High Grade F91, well … 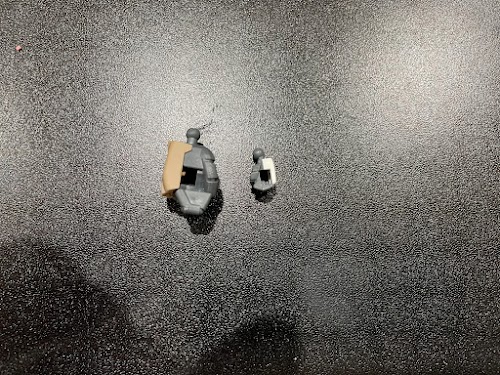 I do wish that we got at least one open palm hand. They’re so versatile, and without them certain poses look off.

The feet are extremely simple. You can probably assemble them in your head just by looking at the pieces:

They are made out of such big, blocky, geometric shapes. When you put them together they are long, tall, and wide: 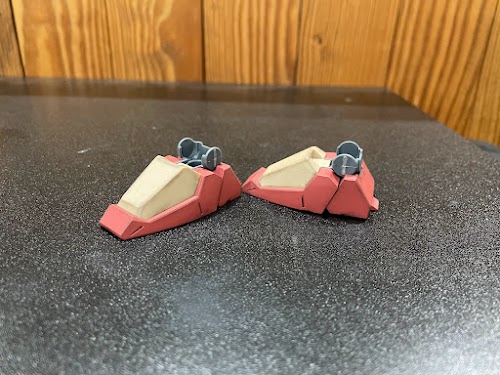 Honestly, if they weren’t so impressively large, I think this design would look too simple and lazy. This is clearly a case of shock value winning out.

Once again, the feet are actually bigger than the Master Grade Epyon’s:

I’d say they’re about the same length and height, but the Messer’s are noticeably wider.

For comedic effect, here it is again next to the Victory Gundam: 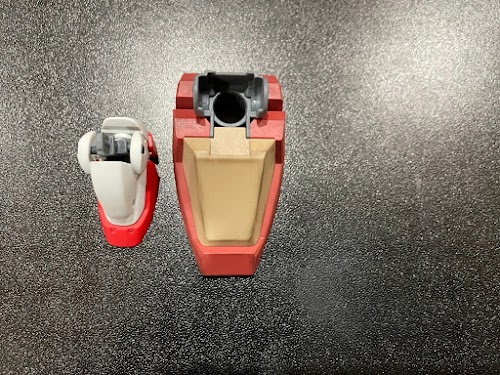 I don’t think I’m going to do any more size comparisons, at least not until the build is complete. I think I hammered home the fact that this is bigger than the average High Grade.

Going forward, I am extremely curious to see whether these completed sections are at all indicative of how the rest of the build is going to go. I am confident no body part is going to use quite as few pieces as the feet or the shield, but the individual pieces could still look and feel as cheap as the shield. If enough of them do, then this model may not be quite as impressive as I’m expecting.