My wife and I have a rule that we’re both very bad at following:

If you encounter something that’s hard to find, get it while the getting’s good

It’s a tough rule to follow because sometimes it requires us to stretch or bust our budget, and that alone tends to put us on our back feet. Plus, it’s sometimes hard to tell if the item really is hard to find. There have been times where we’ve said “no” and never found the item in question again, as well as times where we’ve said “yes” and found it later at a much lower price.

(we’ve also said “no” and later found it at an extremely inflated price. It works in every direction!)

Recently I visited a new (to me) store that sells Gunpla, and found two winners. The Wing Gundam Fenice:

And the Gundam Astaroth Rinascimento:

I came back to the store a little more than a week later and both were gone. Note to self: you are not the only geeky person in this region. Far from it. There are lots of other people who are just as aware of these things, and some of them won’t hesitate to pull the trigger.

Disappointed, I insisted on getting something else to make up for it. But I’m still debating whether my choices were sound. It’s not easy to make good purchasing decisions when your twins are running around overwhelmed at everything at the store, and you yourself are still feeling salty. 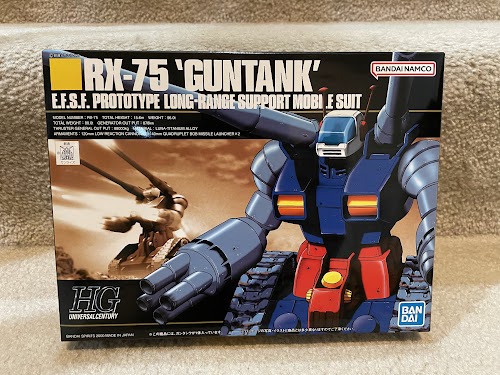 I have no regrets about this one. No, it isn’t nearly as fancy as the ones I missed out on, but the last time I came up short trying to buy a specific Gunpla, it was the Guntank. Getting it now felt like a bit of good karma.

This is the one I’m having second thoughts about. It’s not a bad kit by any means. It’s just that … well, it has the exact same accessories as the Origin version of the Zaku II.

Meanwhile, the original HGUC version of the Zaku I has a very different - and very cool - set of weapons:

It’s got a spiked knuckle shield (with emergency sturm faust), a 105mm cannon, and a smaller type of bazooka that I’ve not seen on any other model (plus a cool little cradle on its shoulder to help stabilize it). They had this one at the store too, and I took a pass on it (If I were alone, and not stressed, I would have taken the box off the shelf and for a closer look).

I’m not going to return it or anything, but I’m hoping the Origin Zaku I looks different enough to stand on its own two feet.

Regardless, I hope I’ve learned my lesson for next time. Or maybe karma will come around again, and I’ll find one or both of the original models in stock somewhere soon.