As HGUC #45, this is a very, very old model kit. So old that its release date isn’t even printed in English on the front of the box (for reference, it was released in 2004).

Usually a kit of this vintage implies a certain amount of simplicity to its design. Sure enough, a quick glance of the kit’s small stack of runners seems to support this assumption: 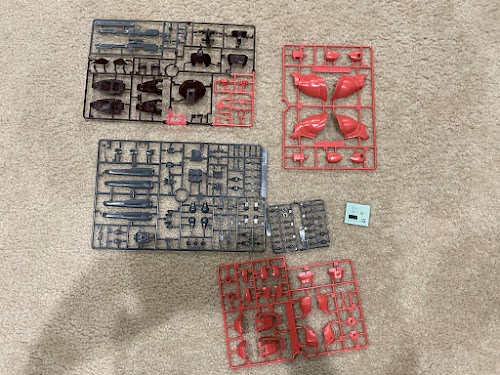 But if we look more closely, there’s some interesting things going on. For one, the parts are very well organized. All of the pieces for the head are in the bottom right corner of the A Runner, all the ones for the rifle are in the top right, and the entire B2 runner is dedicated to the legs.

What’s more, there are some obvious signs that this kit has some solid part separation (at least in its feet). And the sheer number of really tiny parts on the C runner implies a high level of detail somewhere. At the very least I can make out what looks to be roughly a dozen individual thrusters.

I have a feeling this kit is not going to show its age all that much. Of course, there’s only one way to find out. 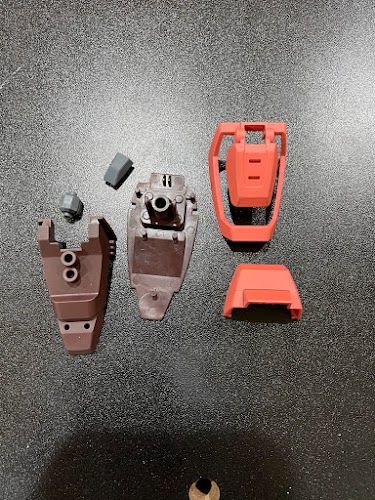 Here is how the bottom of the foot looks out of the box: 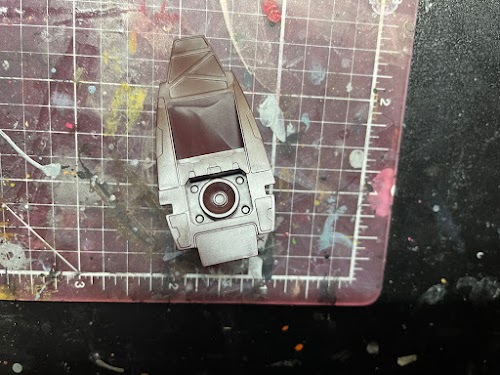 Here is how the instructions say they’re supposed to look:

The only way you’re going to achieve that is if you airbrush the entire model. That’s the only way to ensure that color stays consistent. That being said, I did try to hand paint it anyway, but as you can see, I ended up with more of a true pink than a salmon pink: 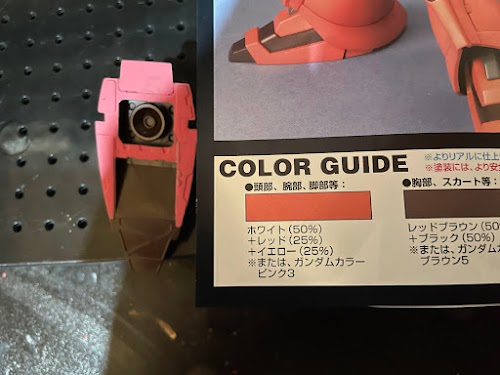 At first I was going to leave it alone, but after sleeping on it I changed my mind and stripped it all away. I opted instead for a simpler paint job that’s more in line with my personal style: 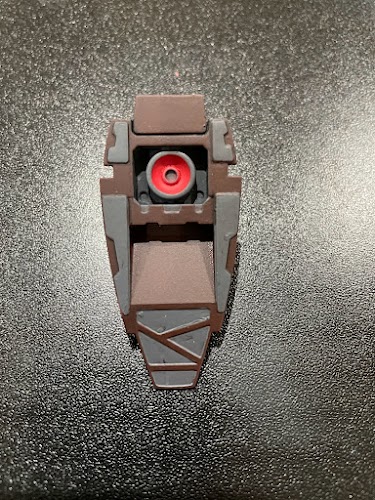 I get what they’re trying to do with the “official” design. The foot is covered in an outer layer of salmon colored armor, and they thought it made sense to extend some of that color to the sole of the foot for the sake of visual consistency. However, the inner layer of the foot is maroon, so it’s not like the sole is color inaccurate.

On that note, this design really does have some excellent color separation and layering. I’m particularly impressed that we get a separate piece for the grey bit at the top: 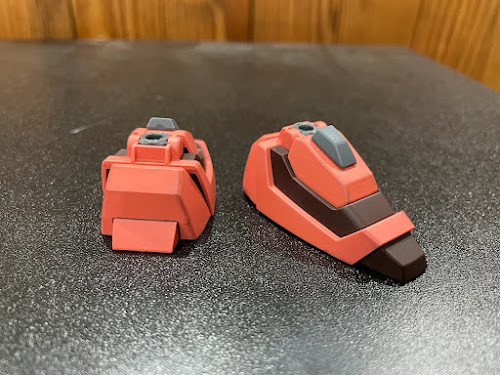 You know what they say about Mobile Suits with big feet ...

As an aside, I wanted to point out that these feet are huge. They may very well be bigger than any other feet on any other model kit I own. It’ll be curious to see how big the rest of the model is in relation. 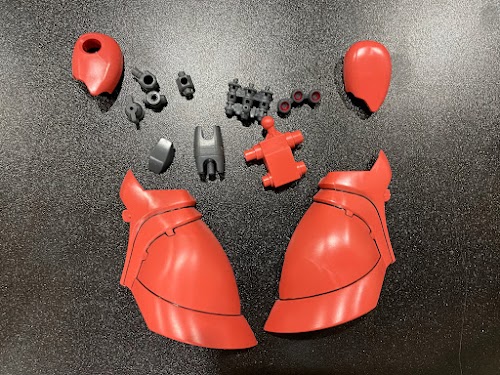 In terms of assembly, this section definitely shows its age. Without getting too far off tangent, there are (in my opinion) at least three eras of HGUC product line - one where the models used all sorts of crazy polycaps, one where they used a smaller set of polycaps (that mainly differ in size), and the modern era (which features many capless builds).

This model very clearly falls into the first category, which is why we see things like the dome-shaped polycap that’s used as the socket joint for the hip.

But despite using so many caps, there are other places where it uses plastic parts that you might not expect it to. Like these two weirdos: 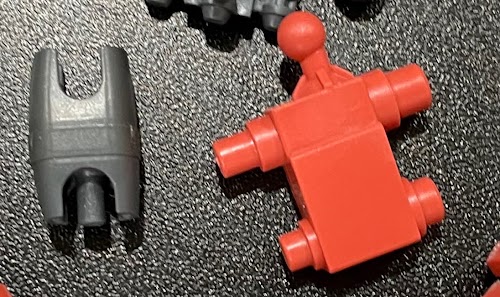 The pink piece is used inside the leg to create the ball joint for the foot, while the grey piece is used to help create the knee joint. I can’t help but think that a more modern kit would come up with different solutions to these two problems.

Anyway, assembly involves plugging a whole bunch of stuff inside the armor: 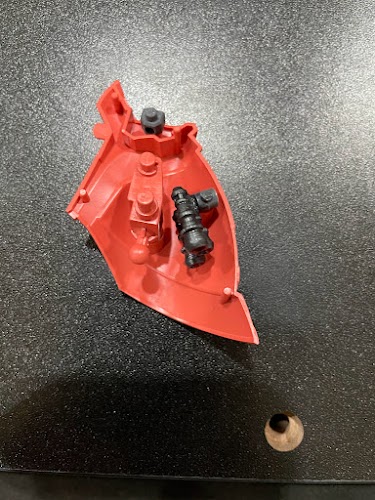 By far the most interesting thing here are the three tiny thrusters inserted near the back: 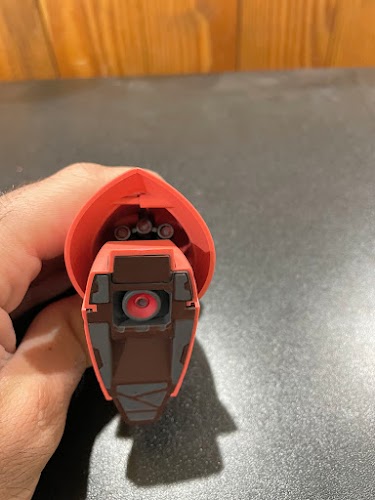 They’re a very cool little detail, though I find it strange that you can’t really see them unless you move the foot forward (I’m assuming the Gelgoog would have computer systems in place that ensure the thrusters don’t fire when the foot is in the way).

The upper legs are assembled similarly. Visually, they look identical to the same section on the Zaku I Sniper Type:

And with that, we finally have the fully assembled legs: 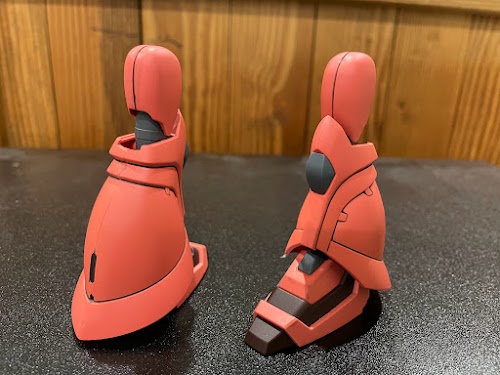 It took me just under a week just to do this much of the model. Part of that is due to how much detailing work it requires, and part of it is due to the fact that lately I haven’t had a lot of time to devote to building. Life has thrown a lot of chores and errands my way, and even when I do have time, I’ve rarely had enough energy. As a result, I’ve been retraining myself to go for (and be happy with) small wins whenever I can get them. For example, one night all I was able to do was strip the paint off of the feet. Normally I wouldn’t consider that progress, but on that night I felt extremely accomplished.

My hope is that this may force me into an even slower, more patient build process. I still think that I’m generally more patient than I used to be, but the fact that I can now easily crank out two kits a month might be a sign that I’m cutting corners or otherwise being less careful than I could be.

But as for this particular build, so far so good.