This is another section which feels old in its assembly. The interior of the torso is made of far more parts and polycaps than seems necessary: 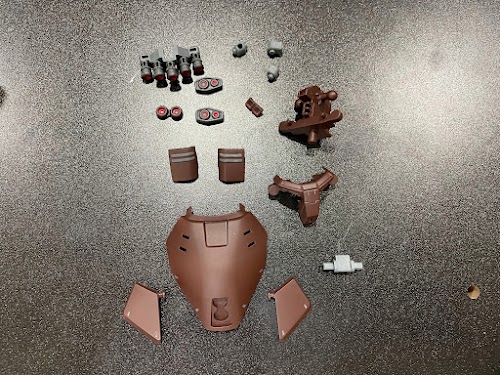 And it’s not even a normal build. You first have to insert the front skirts at this angle: 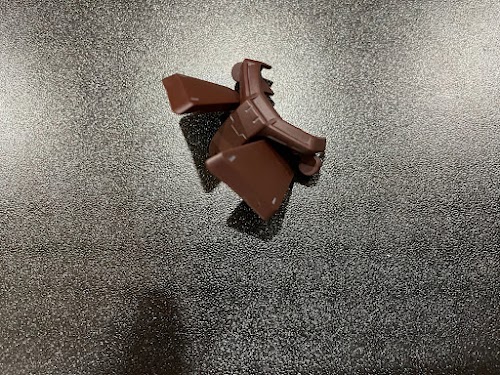 Then you have to rotate them down - but you can’t just do it. If you notice in the photo above, the skirts are blocked by the torso itself. You have to twist them and angle them in order to get them to clear the torso and move into position: 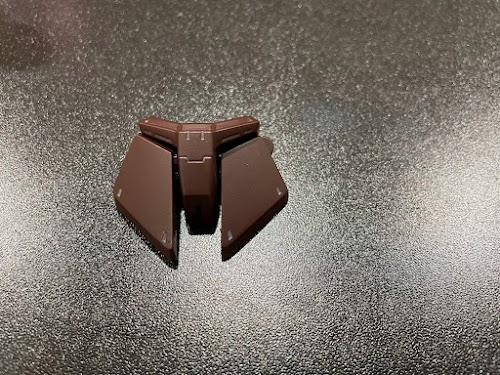 Then you have to attach the back half of the torso (on modern kits, the torso would be a single piece, and there’s nothing about this construction that suggests that there’s any advantage to having two): 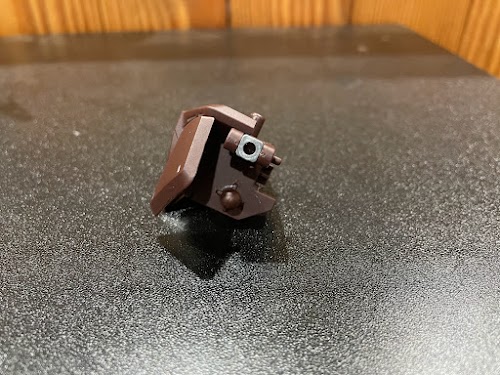 Now for the rear skirt. But first, a query - do you like thrusters? Because we’ve got a ton of them!

On the surface of skirt, we have three different pairs: 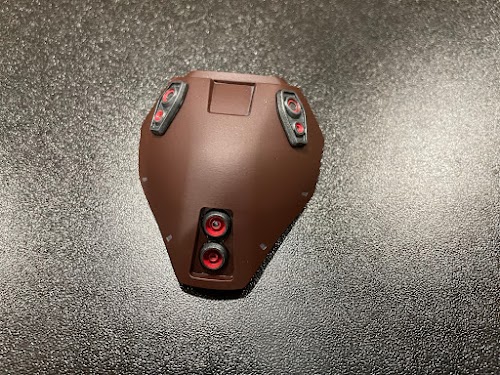 And then there’s five more under the skirt: 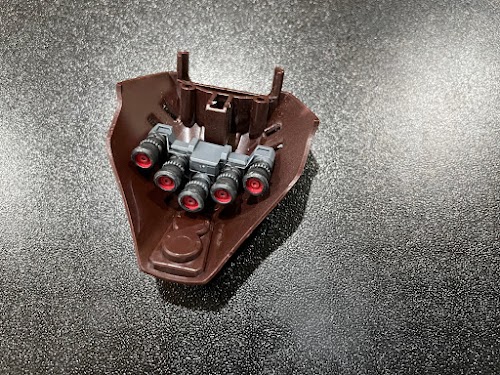 Including the thrusters on the feet and legs, that puts us at 19 total. And we haven’t even gotten to the backpack yet!

Moving on, here are the side skirts: 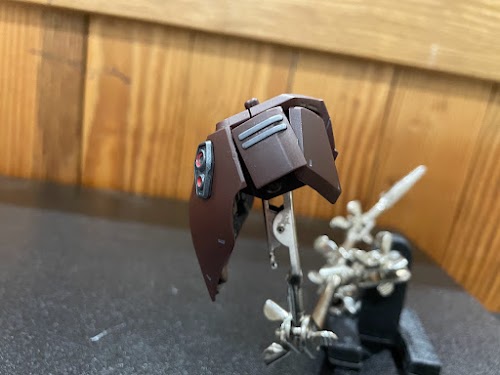 I painted the stripes, otherwise there wouldn’t be a whole lot going on.

Now for the front skirts: 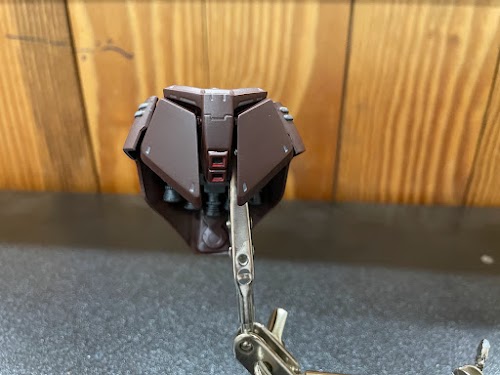 The little squares in the crotch area are supposed to be painted black with red trim. I didn’t do a terribly good job, but I think it should pass the Six Inch Rule (meaning it’ll look fine viewed from six inches away or further).

Now, at last, here it is attached to the legs: My big takeaway is just how large the rear skirt is in comparison to everything else. It is quite large and bulbous. Dareisay that it looks a bit like an old fashioned bustle skirt. It actually works pretty well, since it pairs nicely with its wide legs.

In contrast to the lower torso, the upper torso feels like it is made of too few parts. 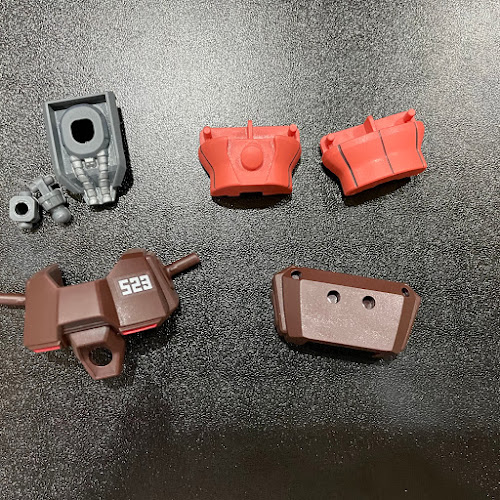 I’m always wary of models that have peg joints - rather than a socket joint - sticking out from the torso. It usually means the articulation around the shoulders is going to be poor. I guess we’ll have to wait and see when we build the arms.

There’s not much to say in regards to detailing here. There’s some spots in the front of the chest and some vents under the arms that you can detail, as well as a decal to apply in the front. Beyond that it’s just standard panel lining. 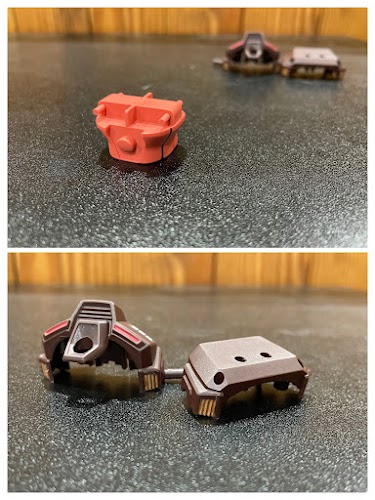 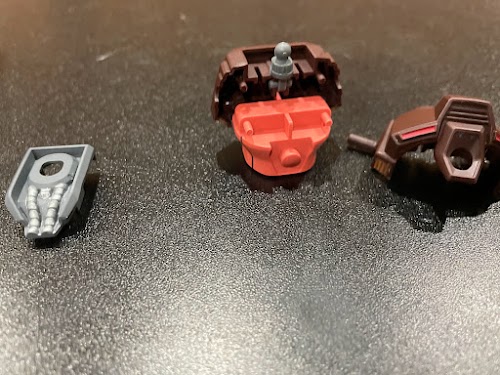 It’s a pretty simple look compared to the rest of the model so far: 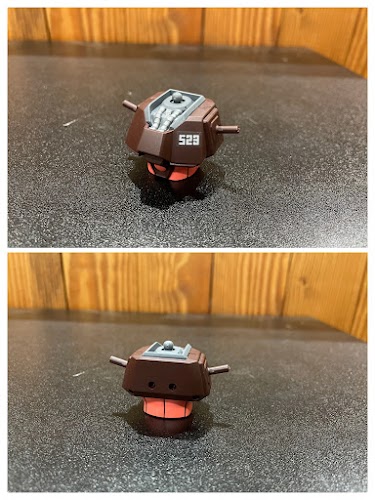 The silver cabling around the head joint goes a long way towards spicing it up.

Let’s attach it to the rest of the body: 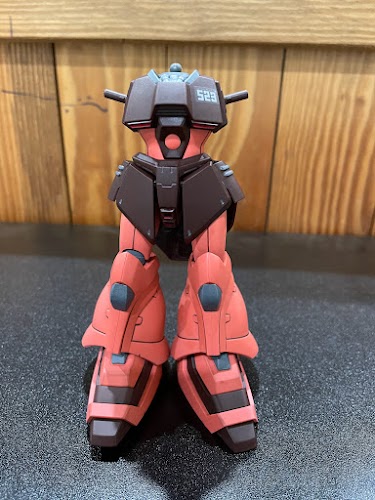 It’s got quite the curvy waist! I never realized how feminine this Gelgoog is. 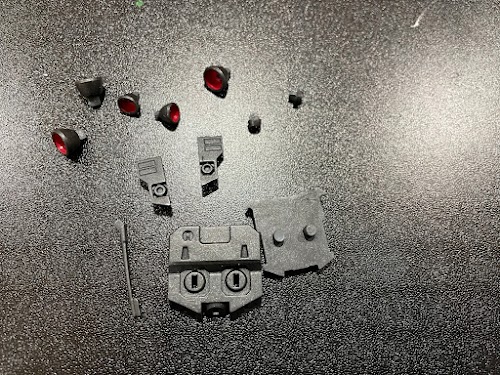 Like the GM Custom and the Gundam Alex, this backpack is made out of multiple parts, including a set of side walls. It seems Bandai does this any time the backpack is particularly deep and/or has noteable detailing on the sides. I personally like when they do this - it always makes the backpack feel that much more substantial. 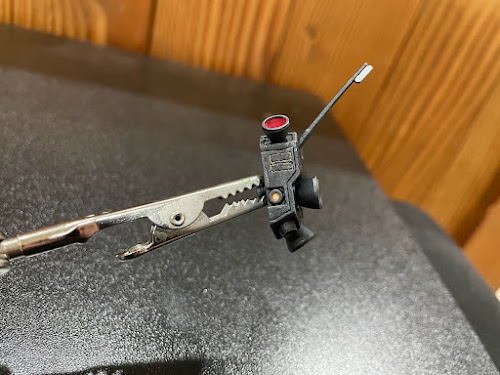 The backpack has a ridiculous seven thrusters, which brings the model’s total count to 26. I’m positive that’s a record for me. This thing must be quick. 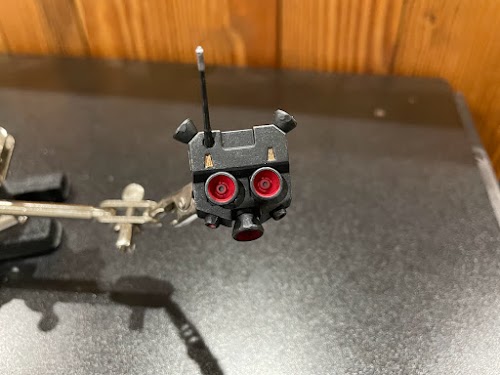 In terms of detailing, I painted the entire thing with a mix of gunmetal grey and black. It doesn’t look great in photos, but in person it has a nice finish. Not too shiny, but definitely metallic. 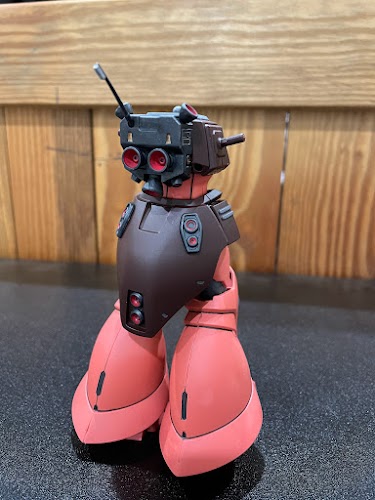 So far, so good. The model is looking excellent, though I’m seeing signs of just how old (read: poor) the articulation is. For example, there is absolutely no ab crunch whatsoever. This may not end up being good for posing, but it should look pretty great just standing there.