Gunpla accessory packs are not all created equal. For example, many of the Iron Blooded Orphans Arms are engineered to work with very specific models. Try and use them with another IBO kit - or worse yet, a non IBO model - and you may not get the results you want.

On the other hand, the packs that were made as part of the High Grade Build Fighters line were meant to be more generic. The boxes show the accessories being used on all sorts of non-Build Fighters models, likely to encourage you to go wild and experiment.

Anyway, I’m assuming the same thing is true of the accessory packs made for Gundam Build Divers, which is why I picked up this Marsfour weapon set way back in December: 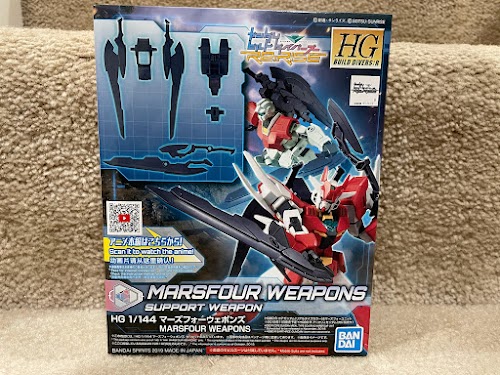 Simply put, it’s a pack of swords. I figured I’d be able to re-use them with any kit that happened to look good carrying melee weapons. Unfortunately, I never got around to cracking it open and painting them, so they sat on the backlog.

But then I completed the Messer a mobile suit that both looks like an evil Hell Knight, and which has a fairly lame beam rifle. It was the perfect candidate for a bunch of big, crazy looking swords, and that was enough to finally motivate me to work on them.

But first, before painting, let’s take a look at what they look like and what they can do. 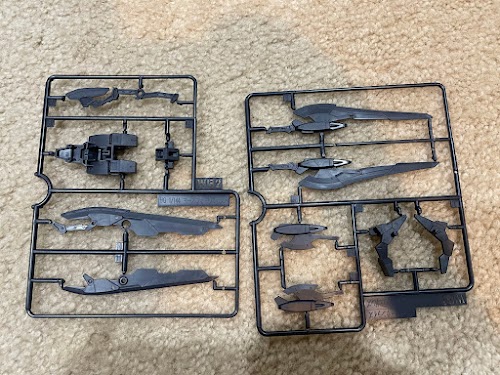 We only get two small runners, but each of the parts is highly detailed. You can make these look pretty fancy if you felt so inclined.

This is the longest blade in the set, and in my opinion it’s the best looking. Simple, but effective: 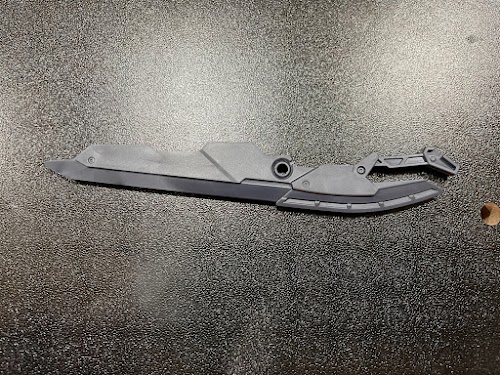 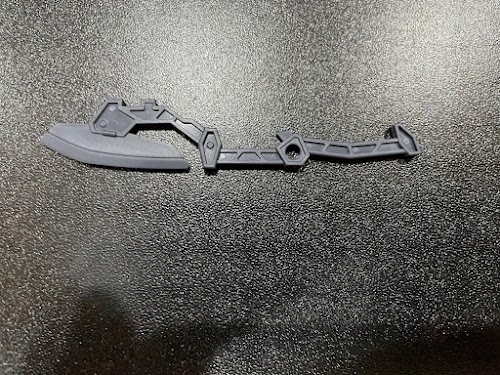 I don’t mind that the blade is so short, but I do mind that it is flush with the handle. Doesn’t seem like you’d be able to get in a clean hit.

Weapons 3 and 4: The Twin Blades

Here we have a pair of identical long swords: 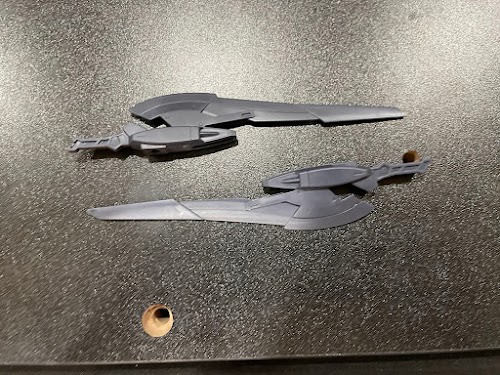 I’m not in love with the way they look, but if you want to dual wield, this is your only option. 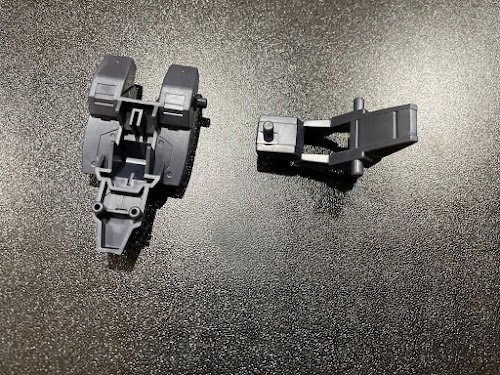 We get not one, but two different backpacks for carrying these weapons. There’s also a small adapter that allows them to plug into standard size High Grade backpack holes.

On their own, four weapons is impressive enough, but we can do more. They can combine in different ways to create new(ish) weapons. 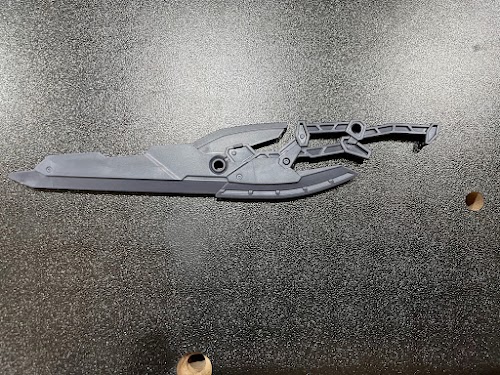 The axe plugs into the top of the long blade. Now it has two blades facing in opposite directions. It’s a small change, and it looks a bit over the top, but overall I dig it.

The twin blades already look a bit goofy on their own, but they look even goofier combined: 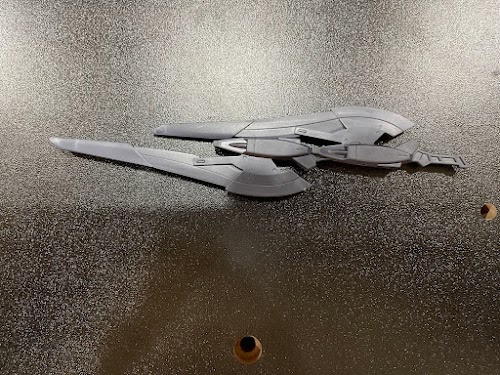 You can also plug a beam saber into either one of the twin blades. The only catch is that it has to be flat-shaped, with a rectangular plug on the bottom. The instructions encourage you to buy another Build Divers option set that has one, but I was able to substitute in a similar part from the Real Grade Gundam Exia:

It looks kind of silly, but I guess it’s still neat.

Here are all four blades attached to the smaller backpack. Notice that we have to combine the axe and the long blade in order to get everything on there. 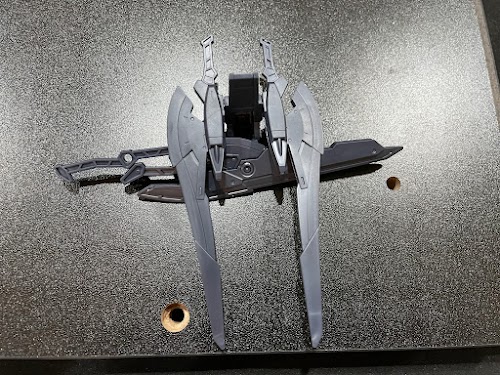 The larger backpack has separate room for the axe, though it does stick out awkwardly: 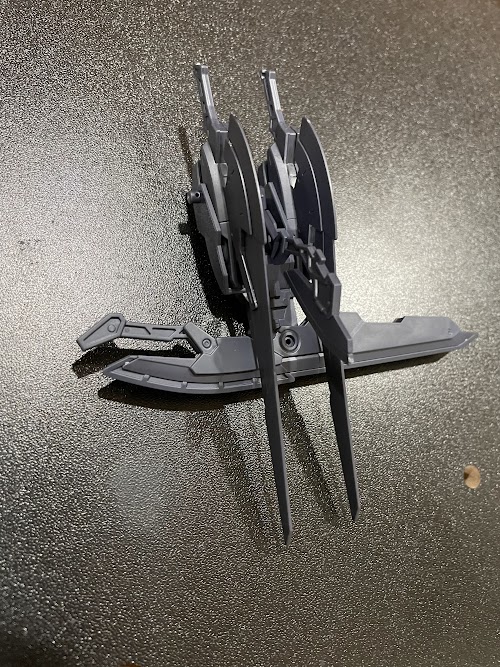 Here are all the parts after painting them: 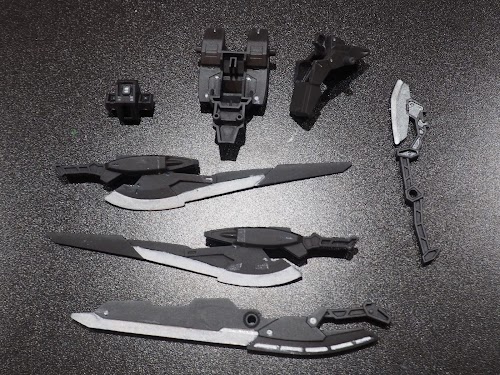 I could have done more - and maybe I will another day - but for now, I just wanted to give them the appearance of an edged weapon.

As it turns out, the Messer was not the ideal test subject. It’s simply too big. The swords all look a bit too puny in its hands: 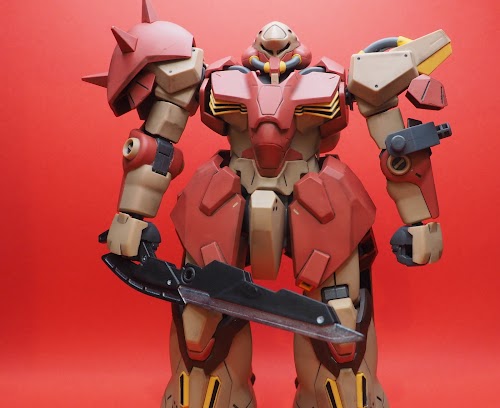 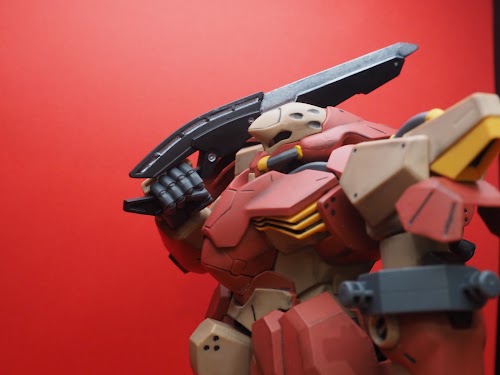 At least, they looks puny from some angles. From other angles, they look halfway decent: 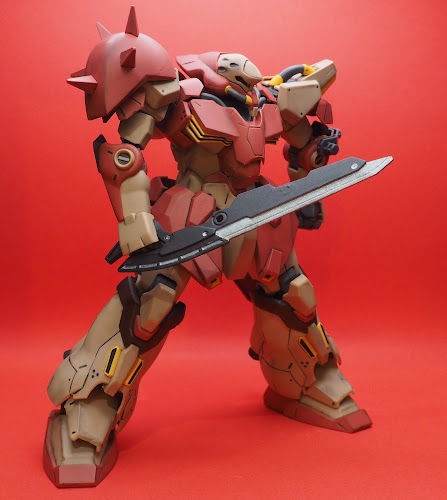 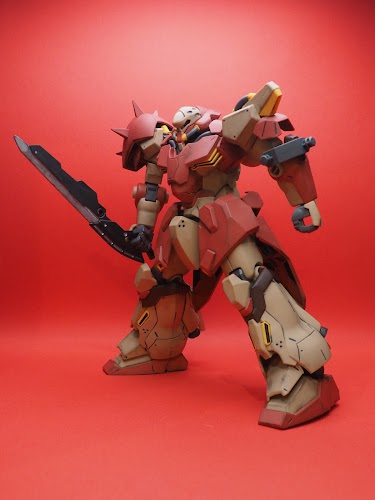 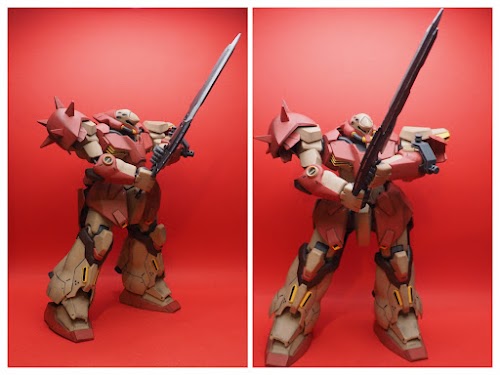 Sadly, the twin blades were a nonstarter. The handles are too narrow, and they fall out of the Messer’s hands: 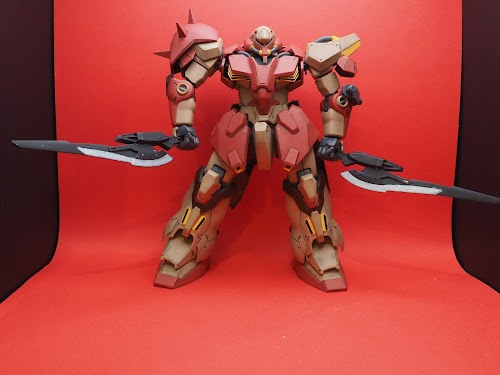 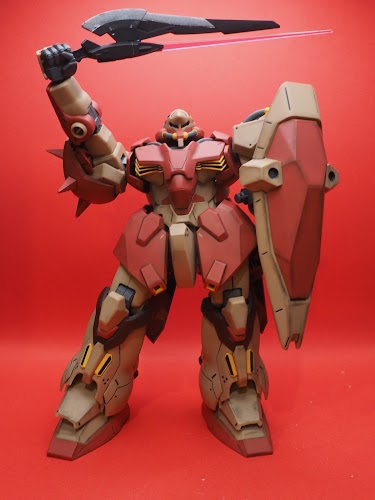 These were a bust for the Messer, but I think they’re going to be great on any normal sized High Grade. This is the epitome of an accessory pack. It’s a good value, it has a surprising amount of playability, and you can customize them to your hear’ts content. Highly recommended.