I didn’t realize until now just how big Gelgoogs are. Compared to my other High Grades, this model feels both very tall and very wide. The feet alone are as massive as I’ve seen at 1/144th scale. 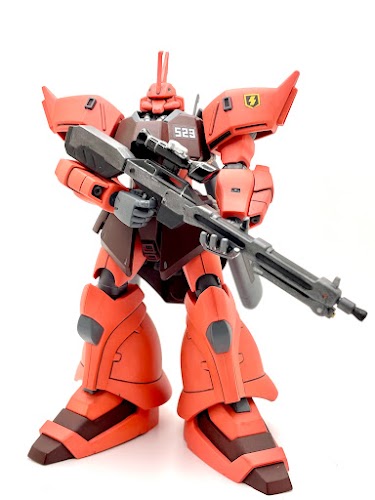 Let’s do some size comparisons to show you what I mean.

First up, here it is next to the GM Command: 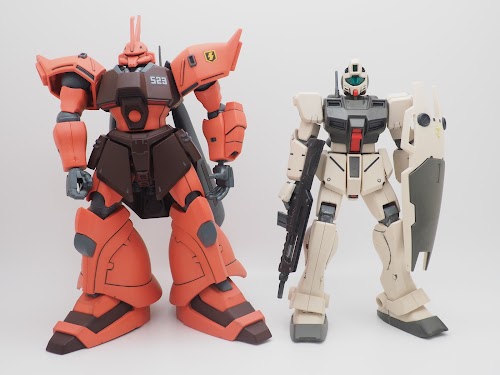 In the War in the Pocket OVA, the Gelgoog Jäger fights against the GM Command Space Type, which is the same mobile suit fitted for space combat. That makes this “regular” GM Command a perfect substitute for the sake of comparison.

As you can see, the GM comes up quite short, reaching roughly the top of the Gelgoog’s torso. No wonder a Gelgoog pilot was able to take one out by crashing into it and shooting into its chest. If I’m in a GM, and I see one of these monsters barrelling toward me, I probably wouldn’t know what to do either.

Next up is the Gundam Alex, which doesn’t techincally fight the Gelgoog, but does have one loaded up as an opponent in its simulator (for the record, the Alex and its pilot win the simluation handily): 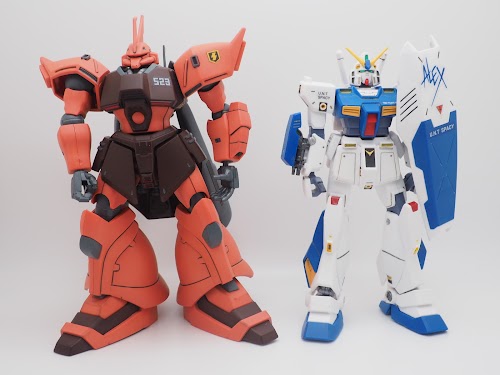 Height-wise, the Alex fares a little better thanks to its V-Fin. Width-wise, the Alex has bulkier legs and shoulders than the GM, and while that goes a long way, the Gelgoog still clearly towers over it.

Lastly, here it is next to the Kampfer, one of its comrades from War in the Pocket:

This feels like cheating. Thanks to the length of its helmet crest, the Kampfer technically matches it in height, but really its head is at about the same level as the Alex’s was. However the Kampfer is just as wide and bulky, if not more so, making it generally feel much closer in size.

So yeah, if you want an impressively large High Grade, you could do a lot worse than this one.

It’s not the most detailed model I’ve ever seen, but it still captures the look and feel of the mobile suit as it is depicted on the screen. The thick panel lines make it look far more parts separated than it actually is, and they help to highlight some of the intricate molding of the pieces. As Mech9 puts it, something about this kit feels timeless. 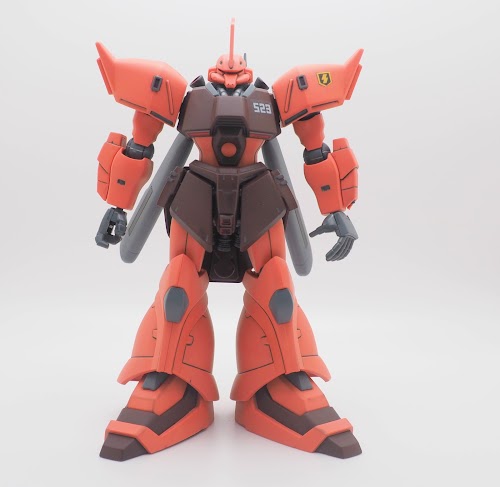 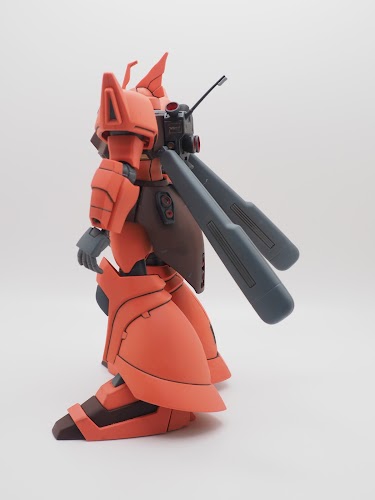 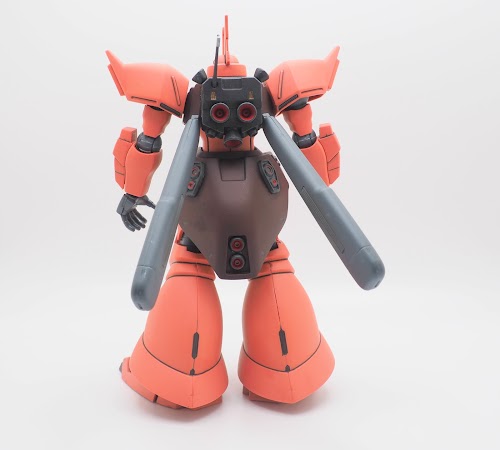 My only complaint (if you want to call it that) is that most of the model’s thrusters are hidden away: 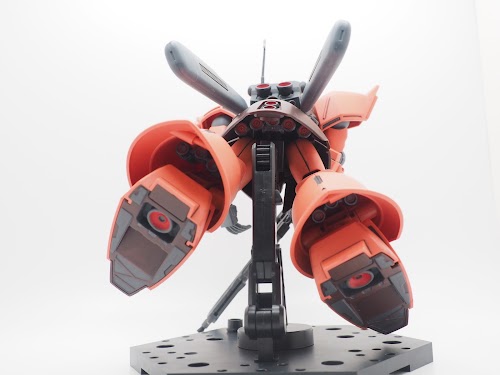 They should make this model feel like a lightning fast bruiser, but that doesn’t work if you can’t see them.

I mentioned previously that I worried that the colors of the rifle would clash with the model itself, but it actually worked out in the end: 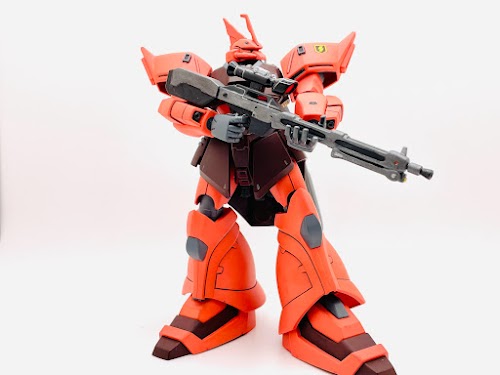 We can agree to disagree, but I think it pairs well with all the grey bits on the body.

The HG Gelgoog Jäger is an old kit. Old kits don’t always have the best articulation, though there are some exceptions.

This is not one of them …

Let’s start with the most obvious limitation - the upper and lower torso sections connect via a peg and hole. That means it has excellent rotation, but literally no ability to do an ab crunch or a backward bend: 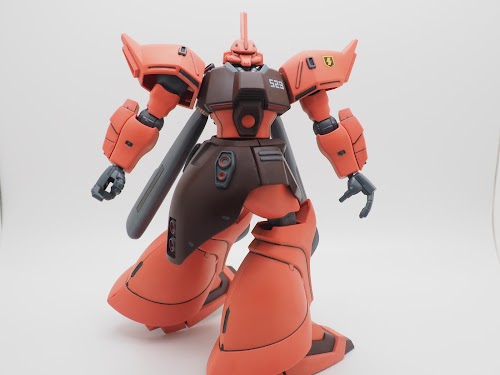 Midsection articulation isn’t flashy, but you don’t realize how important it is until it’s gone. Even a tiny bit of bend in any direction can prevent a model from looking overly stiff during an action pose, especially midair poses.

Despite being on a double ball joint, the head has little up and down movement. It’s just too close to the body: 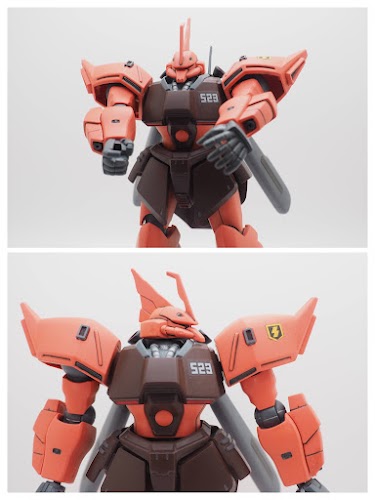 Thankfully, it easily moves from side to side.

Moving to the arms, this is the highest we can lift them up: 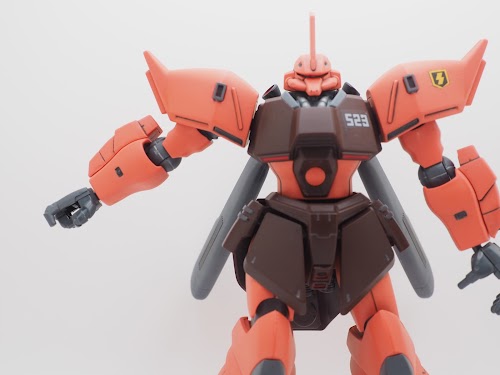 And we can get no better than a ninety degree bend at the elbow: 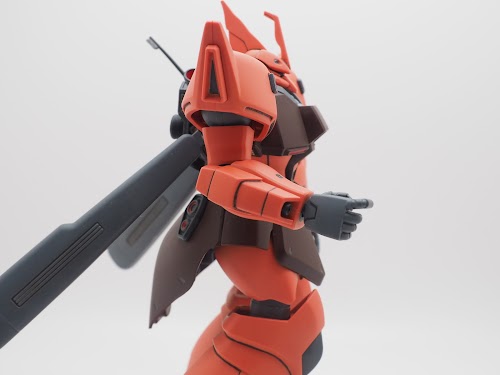 This seems to be a trend among older kits - the HG Gundam Alex has the exact same problem. I suppose it’s not too big of a deal for most poses, though it still feels weird after working with so many newer kits, where the elbow joint practically allows the arms to fold in half.

Continuing down, this is the model’s idea of a split: 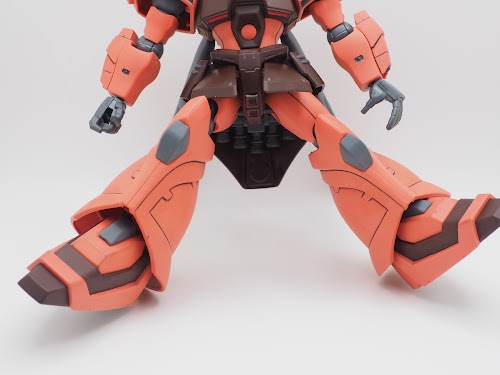 Meanwhile, this photo shows the limits of its knee bend and its leg lift: 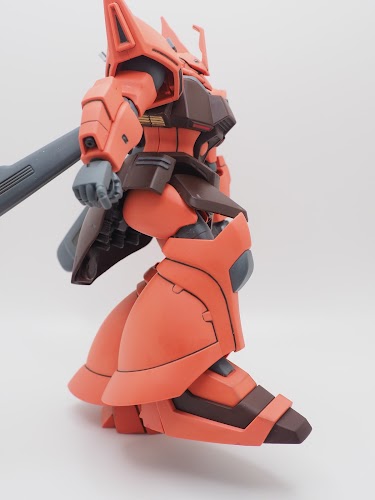 Arguably the model’s best articulation is in its feet, which can move quite a bit back and forth:

It should also be noted that many of the joints are very loose. The arms in particular have a habit of falling off, both at the shoulders and the elbows

(No) Action Base Support

With its propellant tanks and copious amount of thrusters, the Gelgoog Jager is clearly intended to fight in outer space. In fact, that’s the only place we see it in War in the Pocket. In theory this means that it should look best posing on an Action Base. Unfortunately, that is easier said than done.

You see, Action Bases didn’t exist until 2006, and this kit is from 2004. This of course means that it isn’t designed with support for a base. Furthermore, without the ability to bend the torso, and considering the limited range of the legs, it’s not easy to get it into a natural looking middair pose.

In the end, I did get it on the Action Base using one of the attachments I had lying around: 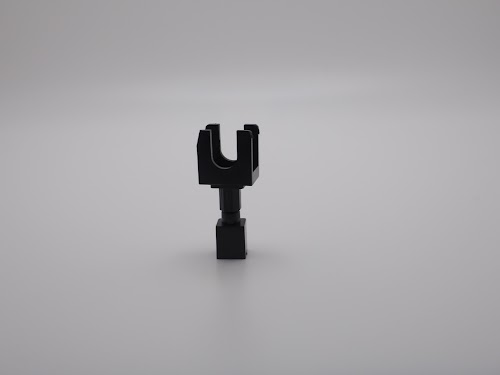 Unfortunately it wasn’t a very stable connection. The model never actually fell off the base (which is nothing short of a miracle), but it also never stood up straight. Every single pose was thus at a small angle.

Sadly, despite being a model of a space-oriented mobile suit, the High Grade Gelgoog Jäger is best suited to standing poses.

But even when doing standing poses, the fact of the matter is that it still can’t really do all that much, both due to its lack of weapons and its limited articulation.

The good news is that it can hold its weapon in both hands, be it in a simple “at rest” pose: 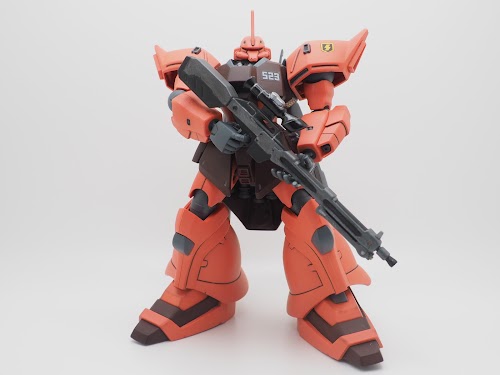 Or in a firing pose: 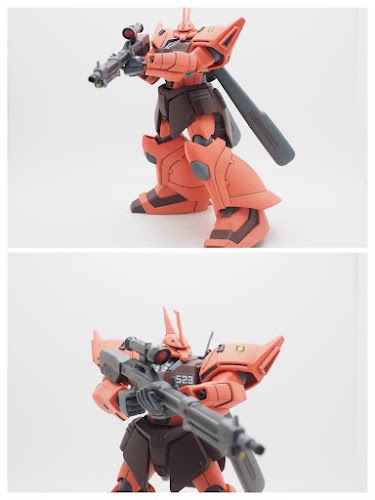 Keep in mind that it can’t really swing the gun to the left or to the right. This is basically the only angle it can hold it at. You can move it up or down, though that would look awkward considering the head cannot.

For what it’s worth, you can also do stuff like this: 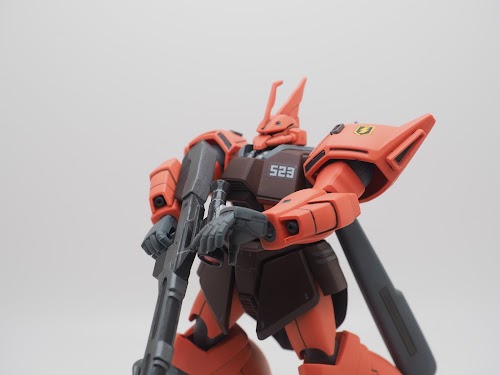 Of course, you can also go for a one-handed attack pose … 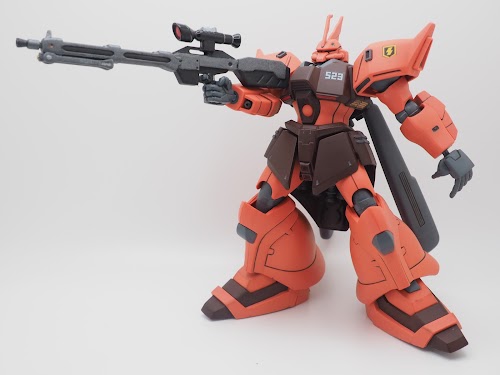 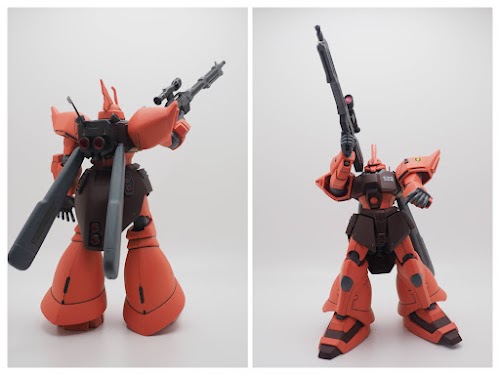 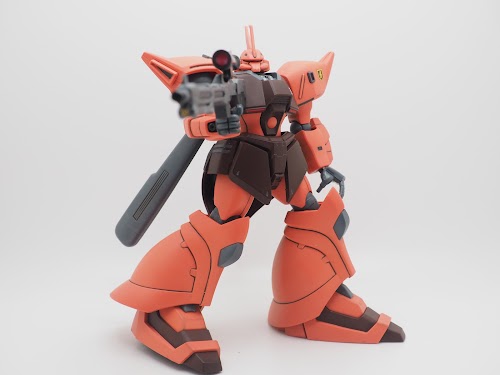 … but it still feels like you are limited to just a couple of feasible angles.

Finally, we mustn’t forget to pose it using its arm mounted cannons: 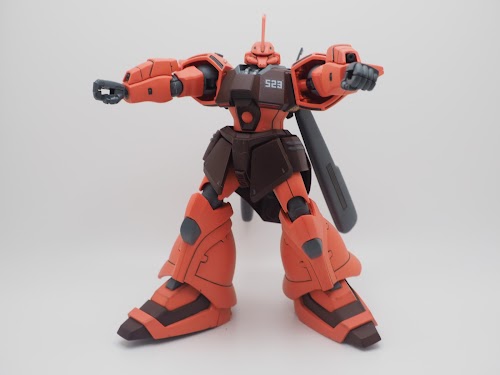 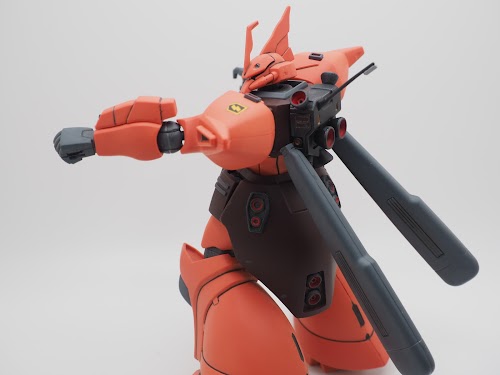 I grabbed the Beam Naginata from my High Grade Dijeh in hopes that I might be able to get some poses with it. Turns out that it only fits in the left hand, though as a real life lefty I don’t see that as a problem: 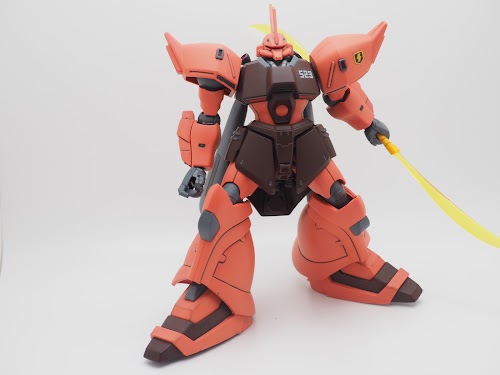 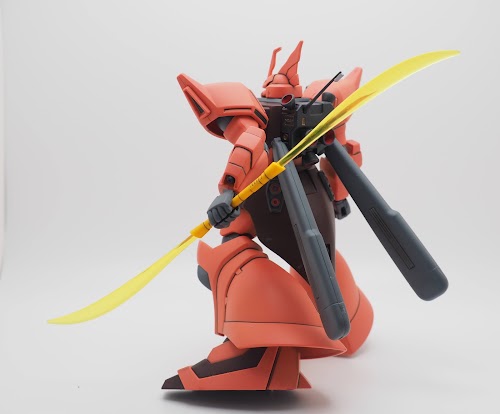 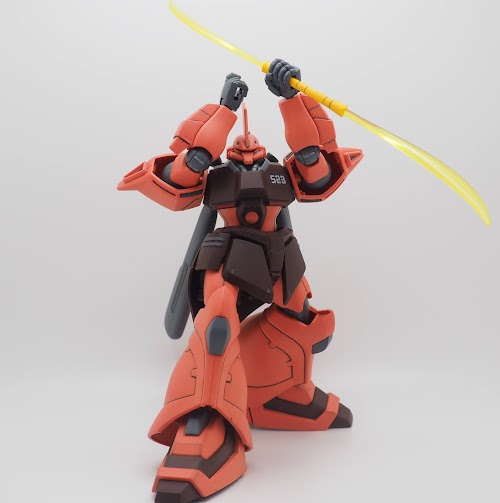 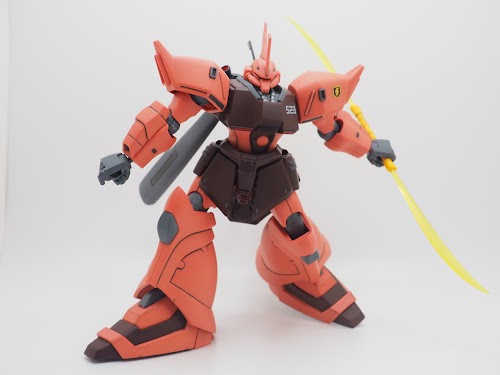 It actually works pretty well, and it’s even the correct color!

Posing on the Action Base

I used the Naginata for the handful of photos I took using the Action Base. 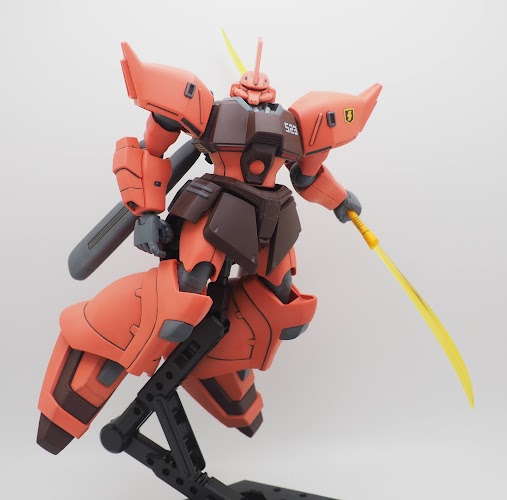 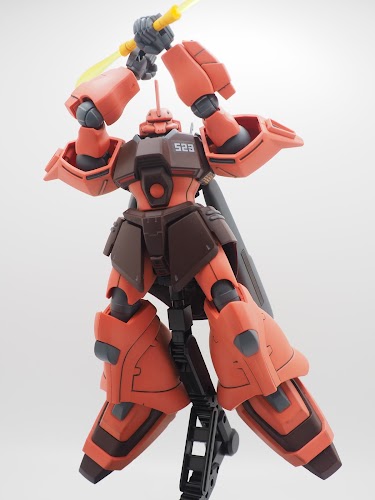 In retrospect, I guess it doesn’t look too bad up there. Maybe I should have done more with it. Ah well - maybe another day …

Looking Back on the Build

I took my time with this one. Between opening the box and publishing this post, over two weeks have passed. That’s longer than usual for most High Grade builds, but in this case it was worth it to get all the details just right. This wasn’t a perfect build - no builds are - but I can’t think of any glaring mistakes, or anything I would have liked to have done differently. Everything worked out nicely. In fact, it makes me think I might be better off continuing to take my time with future builds.

This is a great looking High Grade, but it’s one of those types that you’re better putting in a pose and then never touching again. Between the lack of articulation and lack of accessories, there’s just not that much you can do with it even if you wanted to. You’ll have to determine if that’s a dealbreaker or not.