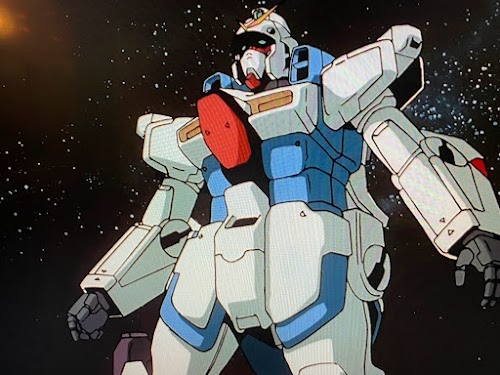 In part 2 of our Introduction, we’ll look at the state of mobile suit tech during the events of Victory Gundam.

For the most part, MS tech hadn’t changed all much in the three decades between the events of Gundam F91 and Victory Gundam. This is (arguably) due to the fact that it was another long era of relative peace, which in turn caused the Earth Federation government and military to become old and stagnant.

However, the rise of the Zanscare Empire gave way to some notable changes. I say “changes” because there aren’t really any signs of new mobile suit tech, but rather advancements and refinements of existing concepts - including a few that had vanished for quite some time.

One of these advancements was the Beam Rotor. This was a new kind of beam shield that emitted roto-shaped beam blades. If spun at a high enough speed, they would provide lift in much the same way as a helicopter. At the same time, they spun so fast that they also doubled as a normal beam shield, as well as a cutting weapon that could saw through an enemy’s armor.

In other words, it made the humble beam shield into a triple threat, but let’s not get ahead of ourselves. It’s hard to understate the impact of the beam rotor, as it completely changed the way mobile suits conducted combat in atmosphere. Up until this point, a mobile suit on the Earth’s surface had only two options for midair combat:

With the Beam Rotor, mobile suits were finally able to fight in midair using their full bodies, which in turn opened up more options for how and where one can attack.

Of course, there was at least one problem with the Beam Rotor - it required the mobile suit to stick its arm up in the air like this … 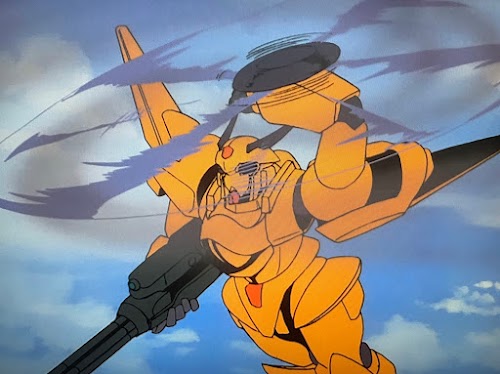 … which looks goofy as hell.

I imagine it’s also a bit difficult to use. Imagine having to remember to pull the rotor in front of you whenever you need to use it as a shield, and then place it back into flight position before gravity brings you to down to Earth. That’s a lot of context switching to deal with in the heat of the moment.

Still, I suppose it’s better than a Base Jabber.

The Return of Transformable Mobile Suits

If Beam Rotors largely work like helicopter blades, why not just lean into that concept? In other words, why not make actual helicopters? This is exactly what the Zanscare Empire does, with a little help from a simplified version of the old Core Block system. At least one of their mobile suits is made out of two parts - a top half that can operate independently as a helicopter, and a bottom half that forms the suit’s legs.

The helicopter mode allowed Zanscare squadrons to cover ground more quickly, expend less fuel, yet still be able to attack and dodge. It may be a revival of a very old method of flight, but it works incredibly well.

About Victory Gundam (the mobile suit) 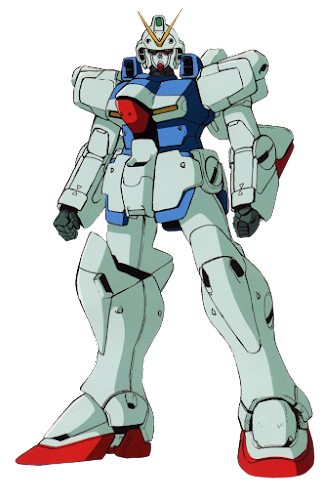 While the Zanscare Empire had some cool ideas, they’ve got nothing on the Victory Gundam. It takes those very same ideas and makes them even better. It may look like a simple design, but don’t let that fool you.

By far it’s most formidable feature is its Minovsky Flight System. At some point in time, engineers were able to make a version of the Minovsky Craft System (the same system used by the massive mobile suits of Hathaway’s Flash) small enough to fit in a miniature mobile suit. Now dubbed the Minovsky Flight System, it once again enabled an MS to float and hover without the use of its thrusters (and without the use of a beam rotor to provide lift, making both of its hands entirely free for use).

Taking something that used to require a massive, 26 Meter mobile suit, and shrinking it down it to fit into the 15.2 Meter Victory Gundam is certainly a technological milestone. When you watch Victory Gundam, you’re watching a Gundam-type mobile suit perform manuevers in the sky that were never before possible. It may not hit you immediately, but once you see, you can’t unsee it.

There are two major improvements over the OG Core Block System:

(It can’t fight with just the Hanger and Boots, because the pilot wouldn’t be there!)

It can even detach the Boots while in mobile suit mode, allowing the upper torso of the Gundam to just float around shooting at things: 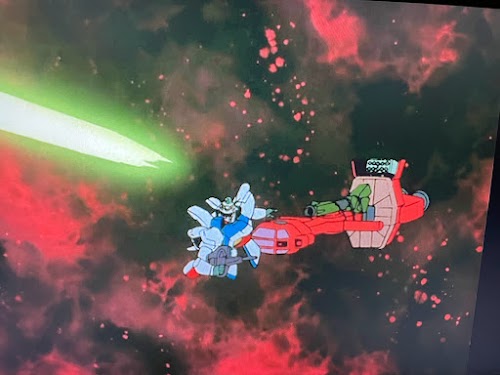 This system gives the Victory Gundam extra versatility, but also extra safety. If someone damages the legs or the arms, you can simply jettison them before they cause an explosion (or you might jettison them so that you can escape a tough situation). Or, if you’re a certain child prodigy mobile suit pilot, you might even launch your legs at your opponent like a projectile, or detach them to use as a decoy. 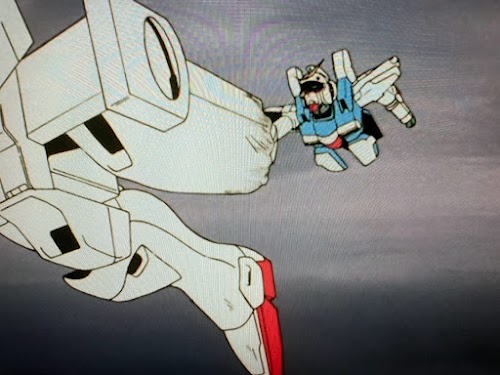 In earlier Gundam stories, the Core Block system was never really more than a gimmick, but in Victory Gundam it is used to great benefit in nearly every battle.

Rounding it all out, the Victory has a few other neat features. They may not be revolutionary, perse, but I think they’re cool:

On the Visual Design

Reasonable people can disagree, but I think the Victory Gundam is gorgeous.

Between the F91 and the Victory, I think there’s a strong argument to be made that the rise of miniature mobile suits coincided with a new focus on aesthetics. They’re both devastatingly powerful units for their time, but they don’t really look the part. Instead, they looks surprisingly simple and elegant (dare I even say beautiful). This is pure speculation, but I my headcanon is that, because most of the core aspects of MS engineering were solved problems at this time, engineers were able to put a greater focus on how things looked.

Victory Gundam leans heavily into French Revolutionary naming and iconography1, and I don’t think it is coincidence that the color placement on the suit makes it look highly reminiscent of the cockade worn during the French Revolution: I don’t think we’ve ever seen a Gundam - or the classic Gundam color scheme for that matter - used to represent a shape or a symbol, and I think it’s a cool idea. The Victory Gundam truly represents what the League Militaire is fighting for.

Of course, you’re more than welcome to dislike the way the Victory looks, but I’ll leave you with this: when a character in Build Fighters tries to pick up women by giving them a Gunpla, guess which what he uses? 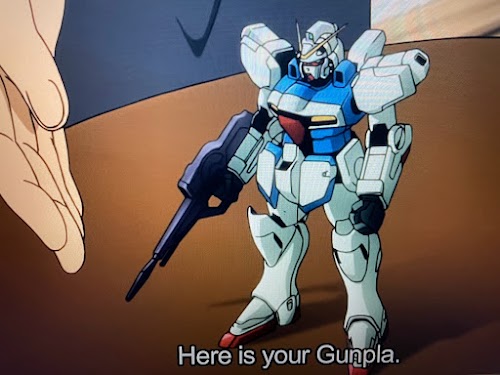 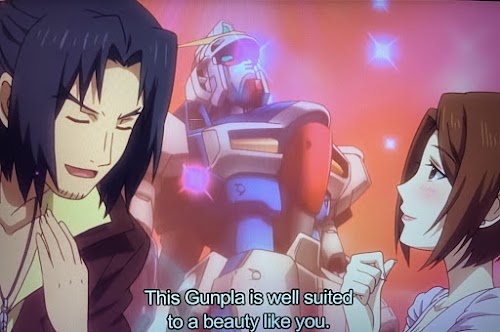 I rest my case.

There is one unfortunate - though perfectly understandable - shortcoming of both the High Grade Victory Gundam model. Because it is so small (even by normal 1/144th scale standards), the Core Block system was impossible to implement. You cannot remove or reattach the hangar or boots. Instead, you get the fully completed mobile suit, and as a consolation prize, a separate scale model of the Core Fighter.

Part of me is disappointed with this limitation on principle, I also understand. What’s more, I don’t actually know if I’d ever put it a partially combined Victory on display.

Besides, the Core Fighter is the best looking of the three separate components, and since we get that, I am (ultimately) a happy camper. 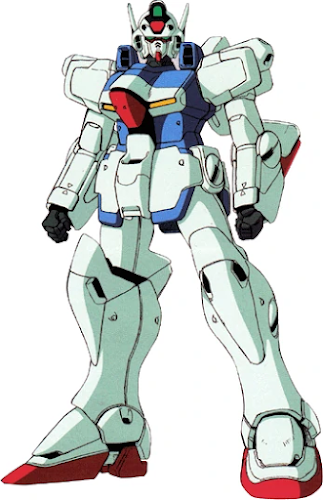