Having taken photos, I can now say that the finished Victory Gundam was surprisingly surprising. 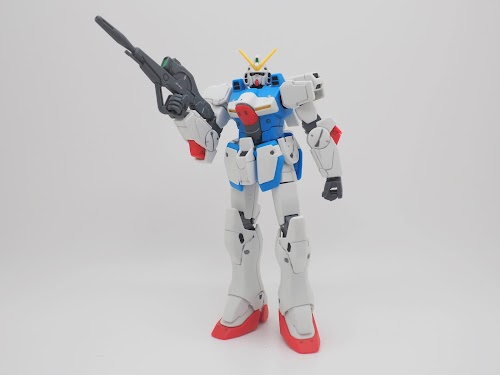 It Really Does Look Good

The High Grade F91 was my first scale model of a miniature mobile suit, and as time goes on, I like it less and less. The designers had to tweak the chest (and possibly the arms) to create enough space for the VSBR’s to flip forward, and the result is that the model looks … off.

While I appreciate that they managed to make the gimmick work in such a small figure, is it really worth it if it’s going to look so janky? The F91 is supposed to be a cool and elegant design, but the High Grade model looks boxy and stiff.

In the back of my mind, I’ve long worried that the problem may not be with the F91 in particular, but with miniature mobile suits in general at the 1/144th scale. Thankfully the Victory dispels that myth, because it looks gorgeous: 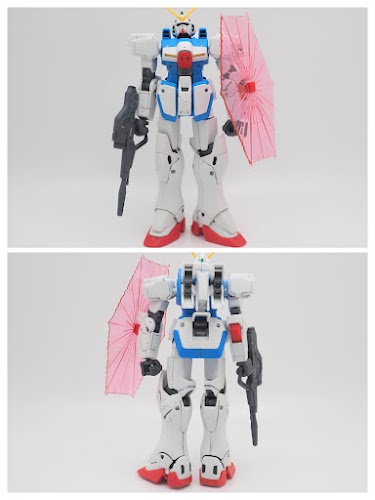 The more I think about it, the more this makes sense. Visually, the Victory is much simpler than the F91, so there’s a lot less detail to capture in such a tiny model. The other, more important difference is that while the High Grade F91 tries to recreate all of its gimmicks - the VSBRs, the changeable face, the moveable flaps and wings - the Victory doesn’t even attempt to touch its own major gimmick (that being the Core Block System). While that may be disappointing on a theoretical level, I think it’s worth it if it leads to a sturdier, better looking model. And that’s exactly what we end up getting.

As I took down the F91 for photos, I realized that the right VSBR was dangling by a thread. I glued it in place, but now it can’t move. I guess that’s just another reason why I ought to spring for the Master Grade kit.

Articulation is bad … but good?

I’ve had a gut feeling for a while now that doing a point by point assessment of a model’s articulation is a waste of time. I think the Victory finally pushed me over the edge.

It’s a matter of holism; the fact that a particular joint has limited range in isolation may not matter in the grand scheme of things. Not every mobile suit needs every joint to have perfect range. In fact, for a given suit, only some joints need to be good (or good enough), and as long as they’re working well in concert, the limitations of the other joints may never really come into play.

In the case of the Victory Gundam, the legs and torso have fairly poor articulation, but the arms don’t. Nor do the feet - they actually have a toe bend, which I didn’t even think was possible given the way they’re constructed: 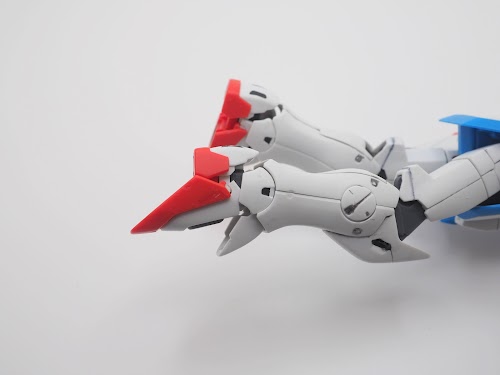 If you’ve seen the show, and you think about the ways in which the Victory engages in battle, then you’ll quickly come to realize that this model has good articulation where it counts.

Due to its Minovsky Flight Unit, the Victory doesn’t often fight on the ground, even when it’s on Earth. Prop this model on an Action Base and bend the toes, and they effectively convey the idea that it is floating or flying. You only need to tweak the knees a little bit (to help convey motion), so the limitation of their range never comes into play. 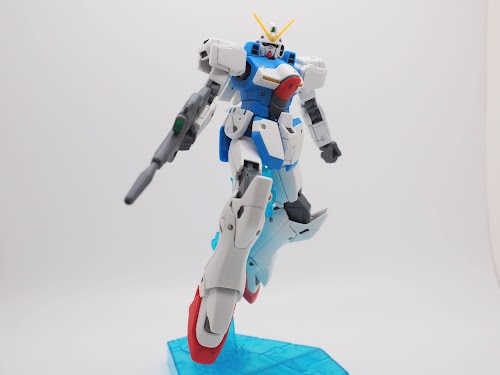 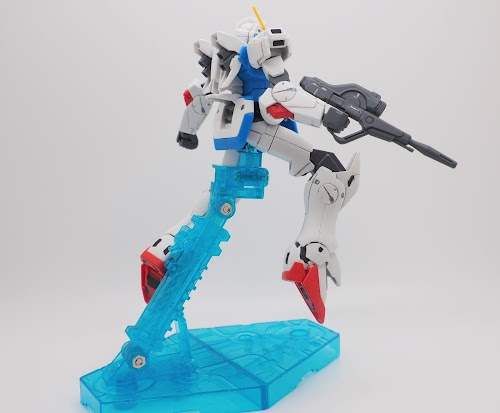 Similarly, when attacking, the Victory tends to move its arms far more than its torso. It doesn’t really matter, then, that it has little to no ab crunch or back bend. What does matter is that the arms allow it to point its Beam Rifle comfortably in any direction, including across its body (this model has excellent crossbody range). 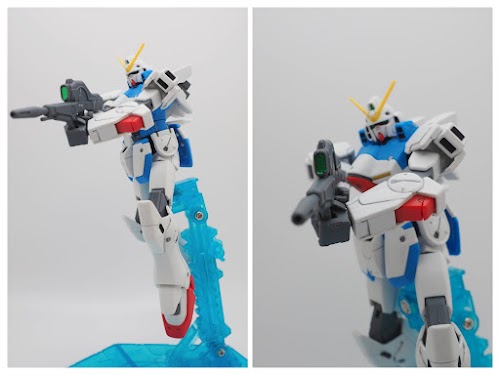 If I were to break down and assess every joint, I’d say the HG Victory has mediocre articulation. But if I were to grade it based on the quality of its action poses, it’s fantastic. It’s one of those models that looks natural no matter what it is doing. 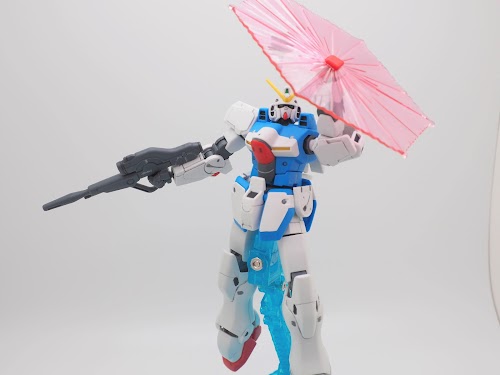 Going forward, I am going to focus more on good poses than on testing individual limbs (unless some joint happens to be particularly good or bad, in which case I’ll probably point it out anyway).

I was mildly surprised that the model came out so nice. I was disappointingly surprised at how limited the articulation was, and then pleasantly surprised to discover that it didn’t matter.

But I was taken completely by surprise at the fact that the weird, fan shaped beam effect part actually works really well in poses: 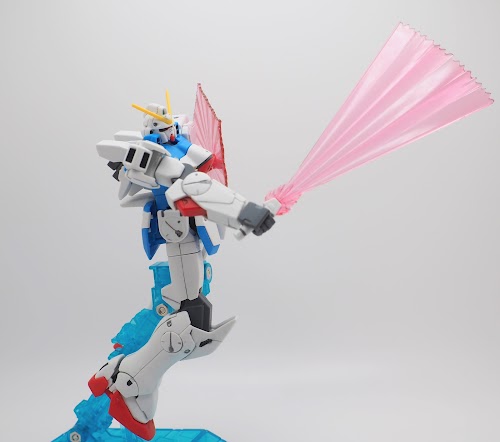 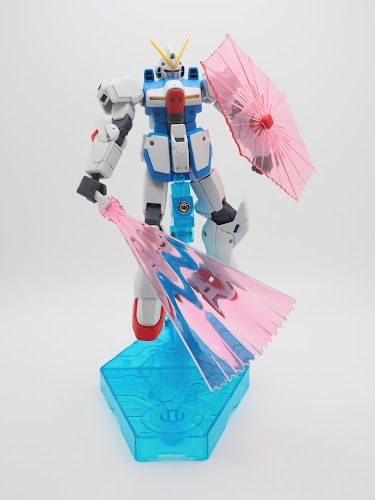 Is it just me, or does it actually give a real sense of motion?

I like the shape of the beam effect part, but I also like how the beam is shorter and thicker than usual. It feels less likely to break, and is more appropriate given the size of the mobile suit. 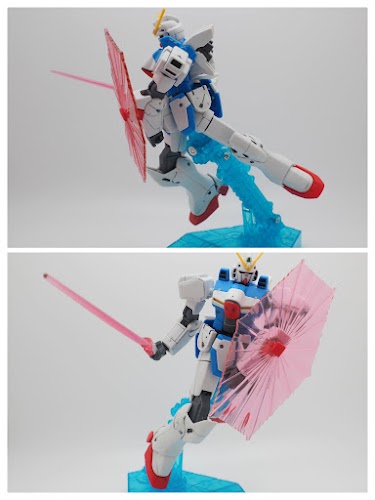 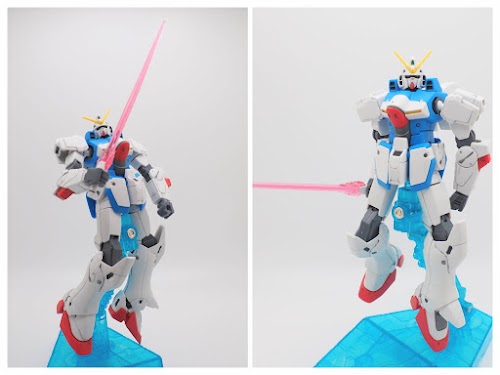 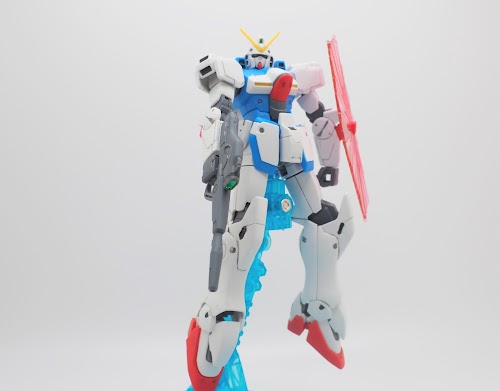 I don’t know what else to say here. The Victory Gundam just works. It’s pretty, it’s photogenic, and it was fun to work on. I’m so relieved that one of my favorite mobile suit designs turned out to be such a winner.