For this build, I’m going to be tackling the oldest model kit I’ve ever built. It’s HGUC #008, hailing all the way from the year 2000.

It’s a pretty simple model, and it’s a bit on the ugly side, but nevertheless there’s something about it that I find endearing.

It’s also a first in the Mobile Suit Gundam franchise. Specifically, it is the first amphibious mobile suit ever seen on screen: 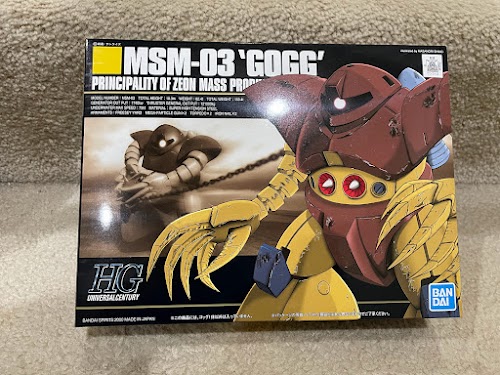 About the Mobile Suit

Technically speaking, in terms of canon, the Gogg is not Zeon’s first amphibious mobile suit - that would be the Zaku Marine Type. But it’s also true that the Zaku Marine Type is just a Zaku with some special equipment strapped to it. The Gogg still counts as their first mobile suit specifically designed for amphibious operations (and, as already mentioned, it was the first one to show up on screen in the original TV show).

The Gogg has at least two possible origin stories:

MAHQ’s explanation makes a lot more sense to me, as it’s just more logical. However, the idea that Zeon might have used their limited resources to mess around with crazy technologies during wartime is far from the craziest thing I’ve ever heard. Maybe the truth lies somewhere in the middle.

Anyway, like so many Zeon designs, the Gogg was built in limited quantities before it was quickly surpassed by newer, better models. Be that is it may, no one can take away the fact that it was and is the basis for all future amphibious mobile suits.

At first glance the Gogg doesn’t look like much. It’s big, fat, and short, with no handheld weaponry to speak of. But take a look at the center of its tummy and you will find its firepower. Here the Gogg houses two torpedo launchers and two Mega Particle cannons, the latter of which were a big deal at the time1.

What makes the Mega Particle cannons so special is that unlike the Gundam’s beam rifle, it isn’t powered by E-Caps, but rather by the Gogg’s generator. This essentially allows it to fire an “unlimited” number of times. And by having two of them, the Gogg can launch quite a devastating barrage.

The Gogg’s powerful generator also means it is very physically strong. That’s good, because it adds a whole lot of crushing power to its sharp “Iron Nail” claws:

Lastly, the Gogg is a very heavy unit with thick armor, so it can take a beating.

And while that may make it heavy, watch out if you fight it underwater. Since the Gogg is optimized for underwater movement, it will still outmove and outmaneuver you.

The Freezy Yard is some kind of netting which deploys from a capsule and surrounds the Gogg: 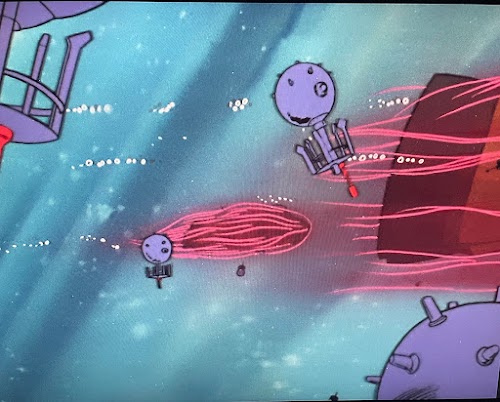 The Gundam Wiki says its purpose is to collect mines without detonating them, but in this particular scene it is implied that its actual purpose is to make it invisible to radar. Whatever the case, we never see it again, so I suppose it doesn't matter.

If the Gogg was so awesome, then why was it so quickly surpassed by later designs?

The main culprit is the reactor. Remember that the Gogg uses seawater to stay cool. That’s not a problem when it is in the ocean, but once it gets on land2 it has to store water in its ballast tanks. And as large as those tanks may be (why do you think the MS itself is so large?), they only give it an on-land operational time of one or two hours (and possibly less if it gives those cannons a workout).

Another problem is that the Gogg is terribly slow on land. Its best strategy is to use its guns to either pre-emptively take out its targets, or to keep them pinned down and unable to close in on it. But if it finds itself in a position in which it itself needs to dodge attacks - say, against an enemy with its own beam weaponry - it is going to get smoked.

Lastly, because the Gogg’s guns are mounted in its tummy - and due to its overall lack of flexibility - it can only fire in one direction (this is an issue that future amphibious mobile suits would solve by putting the cannons in the arms).

All of which is to say that the Gogg is not quite versatile enough. It’s an underwater suit that can only briefly surface to attack, as opposed to the Z’Gok or the Acguy, which are more generalized designs that can fight roughly as well on land as they can in the sea.

The Gogg first appears in Episode 253 of the original Mobile Suit Gundam, in which a pair of them infiltrate and attack a Federation base.

Now to be perfectly fair, the Gundam had a major disadvantage during this battle, on account of the fact that it didn’t have access to its beam rifle. If it did, then it would have made short work of them (we know this because Amuro does exactly that once he gets his gun back in the very next episode).

But without its signature weapon, the Gundam ends up having a heck of a time. The Gogg is so well armored that it is able to block vulcan cannon rounds with its hands: 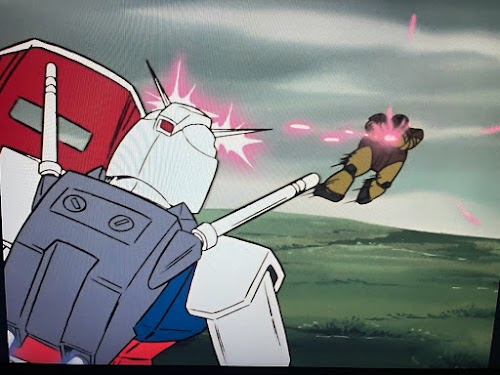 And withstand a hit from the (upgraded!) Gundam Hammer: 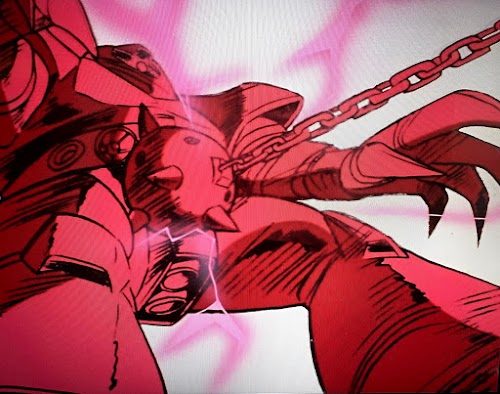 AND catches the damn thing in its hands on the Gundam’s second throw! 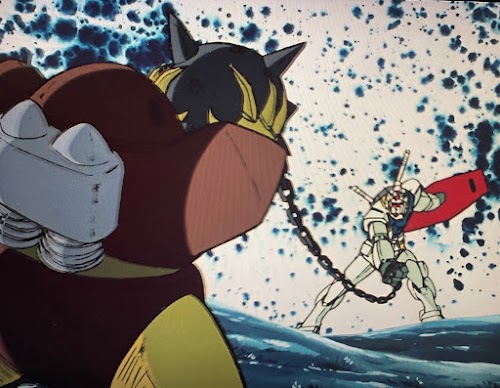 Desperate for a solution, Amuro ultimately takes the first Gogg down by using the new G-Armor and its tank mode. The tank’s beam cannons quickly punch a hole right through it.

As for the second Gogg, Amuro has to chase it underwater, where it swims circles around the Gundam, and eventually tries to tear its head apart like a can opener: 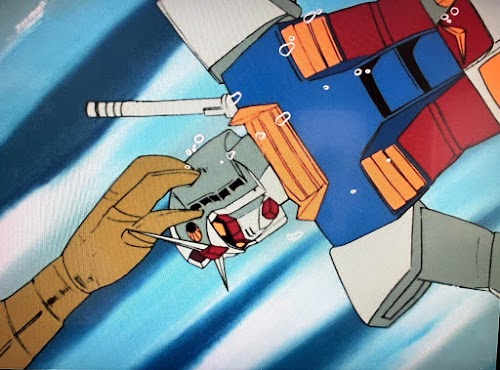 Somehow Amuro is able to stab it in the eye, at which point he delivers the finishing blow: 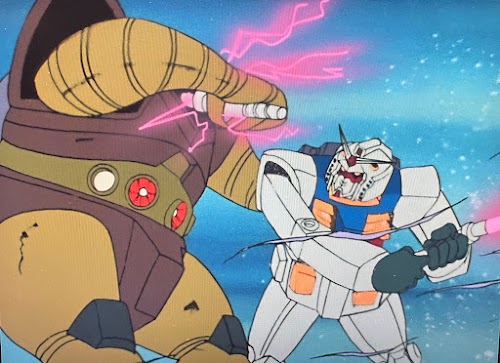 As is tradition, once the White Base crew figure out how to counter a new Zeon mobile suit, it pretty much stops being effective. The Gogg becomes yet another jobber in subsequent appearances, but in its debut it manages to be a new and credible threat that really only lost because the Gundam and G-Armor were still that damn powerful.

About the Visual Design 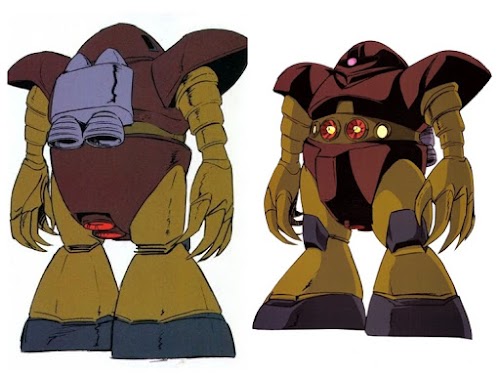 In its original depiction, the Gogg no doubt looks like a goofy-ass mobile suit. But in the scene where it rises out of the water, it shows hints of its true potential: 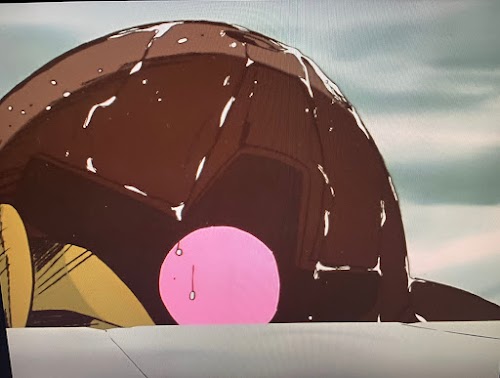 When depicted next to other mobile suits, the Gogg may look like a short, stout, hapless wannabe. But as you can see above, when depicted from the ground level, it has to potential to look like a movie monster.

Furthermore, with just a few tweaks, you can make the base design look a lot better: 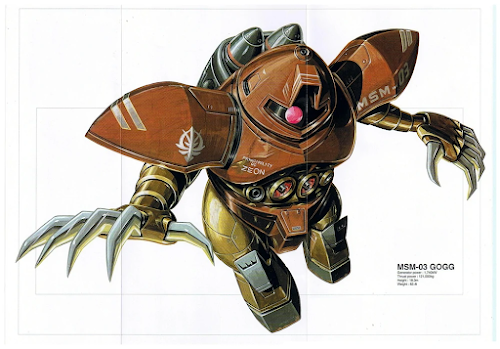 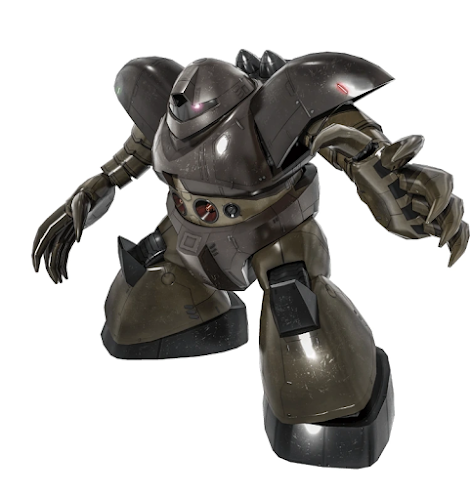 In the first illustration, the Gogg’s been given some nice markings and other details that make it more realistic. It’s shoulders are also flared out a bit more in a way that makes it more reminiscent of the Hygogg.

In the second illustration, the only thing that’s really changed is that it has a darker, more realistic color scheme, and a more sinister looking monoeye (actually both of these illustrations have better looking monoeyes). Both examples illustrate the same point; all you really have to do is eliminate a bit of its cartoonishness, and the design holds up as a big heavy bruiser of a mobile suit.

My goal, then, is to try and capture some of that vibe in my own build.

At the time of writing this, the HG Gogg is the oldest model kit in my collection. As HGUC #008, it was first released all the way back in 2000. It’s old enough to drink!

I have no idea what, if any consequences this will have for the build. On one hand, older kits tend to lack certain “quality of life” features and gimmicks. On the other hand, this is such a simple looking mobile suit that I’m not sure it will matter.